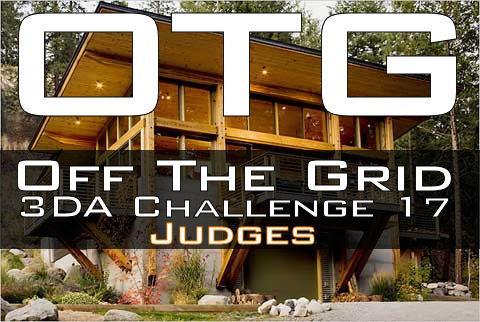 OTG - Challenge 17 Judges: 3DA is proud to have Jeff Mottle, Jeff Patton and Ronen Berkerman judging the competition. We consider this a 'Power Trio' of architectural visualization judges.

Much of his career has been spent evangelizing the architectural visualization and design field.   He regularly run industry competitions and industry awards, writes editorial, perform market research and analysis and speaks at events around the globe.

In addition to founding CGarchitect, Jeff also co-founded the CGschool,  the only school to cater exclusively to architectural visualization professionals.

Jeff has been involved in developing and speaking at conferences around the world including: Mundos Digitales, IMAGINA, VisMasters DMVC,  and the American Society for Architectural Illustrators (ASAI) conference.

Jeff Patton: USA
Known as a mental ray master, his tutorials are highly sought after both in blogs and in his line at Gnomonology. Jeff has worked on accounts as large as Mercedes Benz, were he rendered out some of their 2012 product line.


Jeff is a self-taught freelance digital artist and has been freelancing for the past six years. In that time he has worked on many projects, a lot of which have been mechanical illustrations for companies like Johnson Controls, Trane, Carrier, and Honeywell. More recently he has spent some time teaching on-site mental ray classes, which he enjoys as it has allowed him to travel around the country and meet a lot of really great people.

Jeff is an active member of several online forums such as CGsocietey (CGtalk), and Autodesk's "the AREA" website where he often tries to assist users with their mental ray related questions. In addition, he teamed up with Russell Thomas, owner of 3dallusions.com, to help create mrmaterials.com which is a free material repository for the mental ray community.

Ronen Bekerman: Israel
Ronen Bekerman is an Architectural Visualization Artist based in Tel Aviv, Israel. He studied Architecture at Tel Aviv University during 2002-2005 while working in one of Israels leading architecture firms as a 3d design specialist. In 2005, Ronen decided to focus on Architectural Visualization and 3D Design Exploration. He founded Polytown Studio which creates visuals for a wide range of clients and project types, supporting the design process and marketing efforts of leading Israeli architecture firms with advanced 3d techniques and real-time tools.

In 2009, Ronen launched, what has now become an extremely popular Architectural Visualization Blog offering an invaluable source of information on all aspects of the architectural visualization field. On ronenbekerman.com, There are many Tutorials, Interviews, Tips, News, Freebies and exciting Challenges (Big & Small) to take part in, fine tune your skills, learn and share with the community in a friendly and dynamic forum environment.

If for any reason a judge cannot complete their judging duties, a reasonable replacement shall be found.