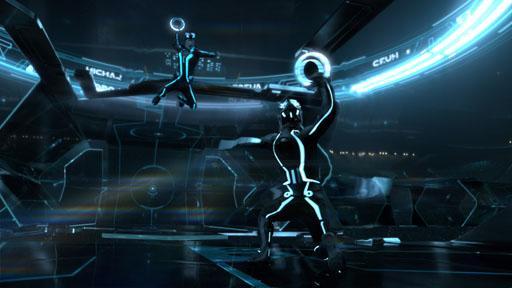 Chris' background is in architecture although he has been working in the VFX field for a number of years. Movies in his credit include I, Robot, The Day After Tomorrow, Stealth and Ghost Rider.

CGA: Did you guys work on any of the architecture at all in those shots?


CGA: Yeah, Joe (Director of Tron: Legacy) had mentioned that there was a lot of actual scale models that were done for this. Did you guys get your hands on those at all?

Chris Nichols: Well, we had a couple things here. We had some helmets here and a couple other things like that, but the light bike itself – no, we didn't have the light bike or anything of that nature. But I think usually props, sometimes we get access to props. Props are usually things that are handled by an actor, so a helmet, disc, things of that nature; baton, sometimes we'll get those. But physical models, I think they did build a full-scale light bike, for the publicity thing.