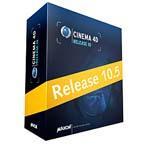 One highlight is the new DWG import filter. CINEMA 4D users now have access to one of the most widely used CAD exchange formats on the market. AutoCAD versions 13 to 2008 are supported, including layers, blocks and references. A further boost to file exchange for customers in the architectural field is the new connection to Allplan 2008, which guarantees loss-free transfer from CINEMA 4D R10.5.

Users working as a team are set to see a huge benefit with the eagerly anticipated arrival of XRefs. These external references allow a large scene to be broken down into parts, each of which can be worked on separately to the master project file, thus allowing multiple users to work on the same project file at the same time for super fast project turnaround. Further additions bolstering the update are new modeling tools (Connect, Dissolve and Spin Edge), a completely new way to light scenes (with the new Lighting Tool you control the lighting rather than the lights), plus a powerful new method to unwrap UVs of organic objects without undercuts.

Naturally, workflow is another area MAXON is always improving. Lots of tweaks here and there will help users to work more efficiently and include extended functionality in the Head Up Display (HUD), which now allows data to be dragged and dropped directly into the viewport. HUD elements can also be colored and grouped easily. Additionally, the timeline has been refined to enable users to work faster than before.  A new summary track allows the entire animation to be edited as a whole, while the new reduced modification mode greatly simplifies the process of editing complex f-curves. For the user who likes to reach for the online help, a welcome addition is the provision of full text search capabilities, making it quicker to look up any subject from the huge comprehensive online help system.

In terms of the modules, key changes were made to MOCCA, MoGraph and HAIR. Animating characters in MOCCA has never been easier thanks to over 25 improvements, such as Squash & Stretch features and new Deformers. MoGraph boasts new effectors and cloning options, allowing this must-have module for state of the art motion graphics to flex its muscles even further. And hair rendering is dramatically faster with full support for multicore and multi-CPU machines - a dual-core machine now renders hair at up to double the previous speed.

With a total of over 90 substantial improvements packed into the update, Release 10.5 makes its mark as arguably the most comprehensive .5 update in CINEMA 4D history.