Craft Spline Speed-Controller gives you an escape from working in percentages. 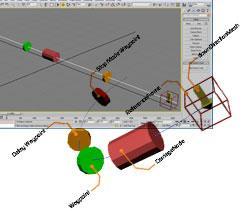 What does Craft Spline Speed-Controller do?

Craft Spline Speed-Controller gives you an escape from working in percentages. Normally when you change the path or length of a spline the whole spline changes proportionately.

Optional Manual Control
You can "drive" your camera along the spline with a joystick.

Waypoints
You can program your camera (or other object) to change speeda at any number of predetermined "waypoints". This means that you don't have to control it manually - though that is also possible.

The camera can also stop at any waypoint for a pre-determined period of delay. Alternatively the camera can stop until you press button, prompting it to continue.

Staying Level
An optional setting will keep the camera 'level' no matter how the spline turns.

Trafic & Stoplights
With Craft Spline Speed-Controller you you have the definitive solution for automated trafic.

The carriage of Spline Speed-Controller can be used to guide Craft 4-Wheeler Extended through your streets. One car leads another and before long you have trafic.

The waypoints of Craft Spline Speed-Controller can be used like trafic lights. One direction of trafic will stop while the other drives.

Speed
Determines the speed of the CarrigeNode when it approaches the specific waypoint.

Delay time in Frames
The length of time (in number of frames) the CarrigeNode will stop at waypoint. The waypoint is colored orange to indicate that it is a waypoint with delay.

Delay time in Seconds
The length of time (in seconds) the CarrigeNode will stop at waypoint. The waypoint is colored orange to indicate that it is a waypoint with delay.

Stop Mode
Makes the CarrigeNode stop at the waypoint. The waypoint is colored red to indicate that it is a waypoint with Stop Mode on.

Stop Softner
Determines how soft the CarriageNode comes to a stop at the waypoint if Stop Mode is active.

Speed Softner
The softness of the acceleration and deacceleration between waypoint speeds.

Movement Softner
The softness of the CarriageNode movement. If you use the value 0 the carriage will follow the spline exactly.

Yaw Mode only
CarriageNode will remain 'level' - i.e. only do yaw rotations and no pitch rotations.

Loop
When the CarriageNode reaches the end of the spline it will start from the beginning again.