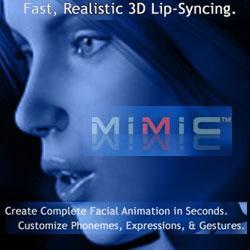 Mimic Pro provides an advanced environment for easily creating and editing facial animation sequences. Take existing WAV audio files of any language and let Mimic animate your figure for you. Or, record your own speech file within Mimic's simple recording studio via a microphone connected to your computer.

With the ability to add in expressions such as winks, nods, and smiles, your figures can easily become as expressive as your imagination allows.By creating the facial animation for you, Mimic's Talkback™ engine will save you hours of production time, allowing you to focus on other areas of your animation projects. Focus your energy on the nuances within your animation and make your characters come alive with real-life mannerisms and body language. The best part is that with the help of Mimic, you don't have to a be animation master in order to quickly create convincing facial animation.Mimic is available for use as a plugin with NewTek's LightWave (version 7.5 or higher) or as a plugin for Curiouslabs' Poser (version 3 or higher).

The full version of Mimic Pro for Carrara is available in both Macintosh and Windows formats and is priced at $199. Mimic Pro for Carrara is compatible with Carrara version 6.2. Current owners of Carrara 6 may download a free upgrade, while new users may purchase Carrara 6, priced at $249 MSRP, and Carrara 6 Pro for $549 MSRP, with promotional discounts available for a limited time.

Founded in 2000, DAZ 3D, a privately-held company located in Draper, Utah, is a market leader in 3D software and digital content creation. The company's library of characters and accessories is renowned for its high-quality, versatile and compatible 3D content. DAZ 3D also hosts the popular Artzone.com, a social marketplace for sharing art and exchanging ideas.