First launched in beta in Shotgun 7.8, Calculated Fields work in much the same way as formulae do in a spreadsheet, enabing users to set up simple mathematical functions to process stored data.

The system enables users to automate common data-processing tasks, create graphs and reports that update with the source data, or generate simple text-based reports on the progress of a project. 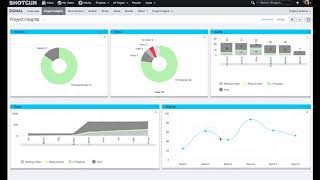 New graphing options, support for Single Sign On, REST-based API for pipeline integration
Shotgun’s graphing capabilities have also been updated, including the addition of tool tips that pop up when the user hovers over a graph or chart to provide extra information about the source data.

Other changes include native language support for Korean as well as Japanese and Simplified Chinese; and for users on Super Awesome accounts, support for Single Sign On.

Since we last wrote about Shotgun, the platform has also gained REST-based API, making it possible to use a wider range of programming languages to connect to it, including C#, Lua and JavaScript.

Both subscription tiers include image- and sequence-viewing software RV for free.

Read a full list of features in Shotgun 7.11 on Shotgun Software’s blog