Allegorithmic’s keynote from its Substance Day user event at Siggraph 2018. The demo of Project Alchemist, the firm’s upcoming material editing and material creation software, starts at 00:31:45.

The new product, which is currently in closed beta, lets artist edit existing Substance materials, or create new ones from source photos or scan data, using a novel mixture of manual, parametric and AI-driven workflows.

A new standalone tool for ‘augmented digital material creation’
Project Alchemist was first unveiled at GDC 2018 with an attractive, but enigmatic, teaser video.

According to Allegorithmic, the software had then been in development for almost two years, and would bring the process of authoring materials “to the next level”, but there was little other information.

Last week’s demo fills in some of the details: on release, Project Alchemist will be a standalone product for “augmented digital material creation”.

Unlike its sister products Substance Designer and Substance Painter, which are designed for creating materials from scratch, Project Alchemist is geared more towards manipulating existing assets.

That could mean stock assets from Allegorithmic’s Substance Source library, content created in the other Substance applications, or real-world scan data.

Allegorithmic vice president François Cotton told CG Channel that while Project Alchemist would “give newcomers to the software an easier transition” into the world of material editing, the typical intended user for the tool is simply “anyone that needs to manage materials”.

“Users today have large libraries of Substance materials and they’ve been asking for a way to handle them as a library, rather than as individual materials,” he said.

Blends hand painting, parametric editing and AI-driven workflows
As well as the source of its data, another unusual feature of Project Alchemist is the number of different ways that the software gives you to manipulate it.

On top of hand painting, parametric editing, and dedicated toolsets for processing scan data, that includes a number of AI-driven tools.

The Substance Day demo showed an AI-powered de-lighting tool, designed to remove baked-in highlights and shadows when generating materials from source photos: you can see it at 00:45:50 in the video above.

Allegorithmic also tells us that Project Alchemist also uses AI for “image recognition, C++, Substance-based content”, and that it planned to experiment with other technologies, including Nvidia’s UpRes.

Although the firm describes AI as “useful”, it says that it won’t replace manual editing – for now, at least – and that the real power of Project Allegorithmic is the way in which its different workflows interact.

“With Designer, you have to know where you want go,” said Cotton. “Alchemist is about iterative workflows that present opportunities for happy accidents.” 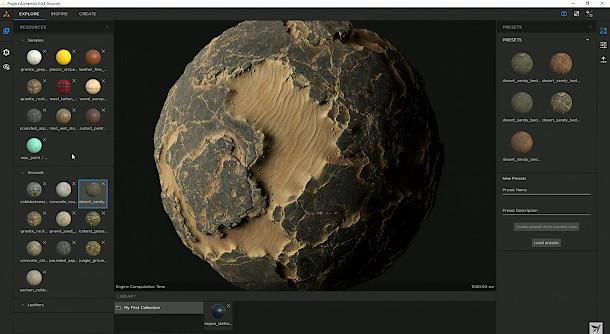 The sides of the screen are occupied by a Layers palette and slider-based parametric controls; a horizontal palette at the foot of the screen shows the library of materials in use.

Tools are divided into three tabs: Explore, Inspire and Create.

Of those, Explore will be the most familiar to anyone who has worked with materials in Substance format, enabling users to browse existing Substances and edit them via the controls exposed.

The edited material can then be saved as a new preset. 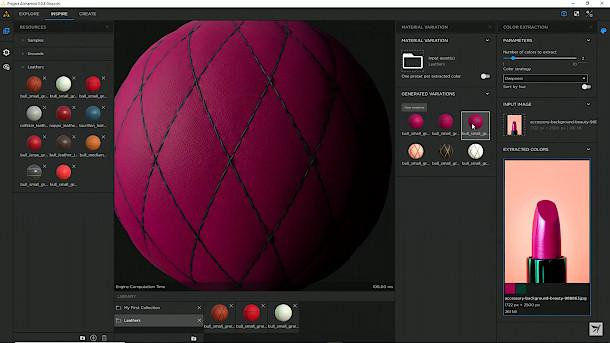 Dragging and dropping an image to the Extracted Colors section of the UI causes Project Alchemist to sample a user-determined number of colours from the image, and generate a new variation using them.

A Color strategy drop-down determines how the image is sampled: for example, to force the software to sample only colours from a foreground object, rather than the background of a photo.

As you can see from 00:36:40 onwards in the video, it looks a lot of fun to play with: Allegorithmic says that the feature was one of the most popular among Project Alchemist’s beta testers. 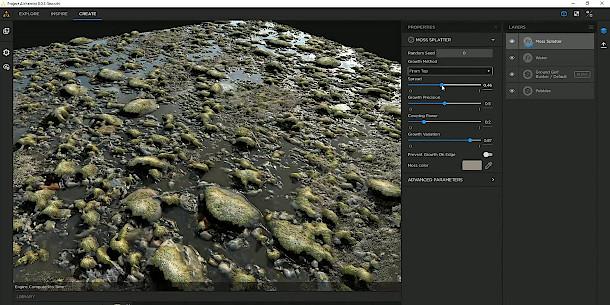 It works with both single images and sets of source photos, reconstructing a 3D versions of the original surface from which a user can bake a standard range of texture maps, including normal, roughness and AO.

Options include a tiling filter to generate seamlessly tileable materials, an equalizer to even out the intensity of the height map and – as we’ve already seen – an AI-driven de-lighter to generate a clean albedo map.

There is also a handy-looking Normal to Height filter, which works on both scans and baked meshes.

Allegorithmic says that it does a much better job of converting normal maps to height maps than Substance Designer, describing the results as “super-clean … almost perfect”.

The software also features tools for blending scan data of the type that Allegorithmic has recently begun introducing in Substance Designer, with options to create a height blend between source materials.

As you can see from the image above, it’s even possible to add a layer of surface water or vegetation.

Workflow is layer-based and non-destructive, with the results previewed in real-time in a 3D viewport.

Add your own custom tools by writing C++ filters
For studios and technically minded artists, another interesting feature of Project Alchemist is that it’s being designed as an open platform with a plugin API.

According to Allegorithmic CEO Sébastien Deguy, “anyone capable of [writing] filters in C++ will be able to [extend the toolset]. Substance Designer isn’t the only option any more.”

The firm’s Substance Share website already provides its users with a way of sharing tools, and Allegorithmic predicts that the range of custom filters available will “explode” on Project Alchemist’s release.

Pricing and availability
Project Alchemist is in closed beta, with an open beta due “very soon”. According to Allegorithmic, it’s “too early to tell when we’ll see a final release”.

Project Alchemist will be free to anyone on a Substance subscription, which start at $19.90/month for Indie users and $99.90/month for Pro users. Allegorithmic declined to comment on pricing of perpetual licences.


Visit Project Alchemist’s beta page on Allegorithmic’s website
(At the time of posting, it only features a link to apply for the private beta)