The software has been commercially available in beta for a while now, but we haven’t previously managed to cover it, so this seems as a good a time as any to provide a quick run-down of what it does.

A motion graphics and VFX tool designed by games artists and VJs
Although it creates 3D graphics, Notch Builder comes at the task from a different angle to most DCC apps.

The software is part of a family of tools designed for generating live visuals for gigs, stage events and installations: past uses range from tour visuals for U2 and Foo Fighters to the Broadway musical of Frozen.

While the Professional edition of the software is designed to integrate directly with media servers for live playback, the Base edition renders out standard video footage, like any other DCC tool.

However, it’s one that may appeal to users who don’t have a conventional background in motion graphics or VFX: many of 10bit’s FX staff come from games – director Matt Swoboda used to be principal engineer at Sony Computer Entertainment Europe – and the firm tells us that devs and TAs take to the software quickly. 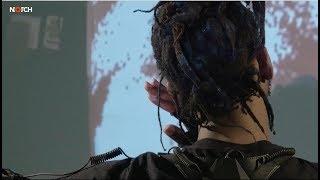 Clone objects and link them to particles, fluids and volumetrics in real time
Notch Builder is a fully node-based application, and in demos, comes across a bit like a cross between Cinema 4D and Houdini, with some interesting unique features of its own.

It isn’t designed for asset creation: there are currently no modelling tools, so complex geometry has to be imported in OBJ, FBX or – as of the latest update – Alembic format, or as Cinema 4D or LightWave scenes.

What you do get is a suite of tools for cloning objects, linking them to particles, fluids and volumetrics, and adjusting materials, lighting and post effects in real time.

All of those systems can be wired togther in the graph view, but you also get conventional parametric controls for lighting and mateials, and keyframe and curve editing for animation.

Scenes can be driven by MIDI, video or motion capture data input – either streamed live or offline – and the software also integrates with Microsoft’s Kinect and Intel’s RealSense 3D cameras.

For rendering, the software uses its own proprietary DirectX-based engine.

It’s very much a real-time workflow: 10bit FX describes the software as helping “creators rediscover the joy of problem-solving, experimenting and improvising on the fly”.

Scripting is done via JavaScript rather than Python or C#, and there are some unusual options like being able to read RSS feeds to pull in images or text. 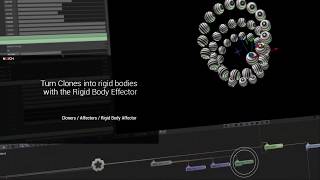 New in Notch Builder 0.9.21: Alembic support, face tracking and rigid body physics
Notch Builder is still officially in beta, although the software has been commercially available for some time, so you could look at it more as a soft launch than a conventional beta program.

However, some big toolsets are still being added: as well as Alembic support, the 0.9.21 update adds face tracking, using machine learning techniques to identify faces in any 2D video or live feed.

It also adds rigid body and cloth physics, alongside the existing SPH and FLIP fluids. It’s a proprietary implementation, rather than a third-party library like Bullet, and works with clones and procedural meshes.

The update makes Notch Builder fully 64-bit – it was previously only available as a 32-bit runtime – which makes it possible to work with much larger data sets.

It also adds a new codec, NotchLC, for video playback and rendering. It’s designed for GPU transcoding and, according to 10bit FX, provides better image quality than existing QuickTime codecs like Hap or Hap Q.

The software’s lighting engine has also been updated, including a new Point Cache node, which can be used to accelerate bounced and HDR dome lighting. You can find a full list of changes via the links below.

Pricing and availability
Notch Builder is available in beta for Windows 7+.

For commercial use, it’s rental-only, with the Base edition costing £99/month (around $130/month) and the Professional edition costing £189/month ($249/month). You can see a feature comparison table here.

For non-commercial use, there is a £99 perpetual licence, which gives you access to the full toolset, but watermarks output, or a completely render- and export-disabled trial version.


Read an overview of the new features in Notch Builder 0.9.21 on the product blog


Full disclosure: When I went to see a demo of Notch Builder last month, 10bit FX paid for my train ticket.