The release introduces Flex, a new tool for updating the geometry of a previously rigged character, and updates Shifter, mGear’s modular auto-rigging system.

It provides character artists with a library of customisable rig components for different body parts, and is intended to generate “an infinite variety of rig combinations … without programming knowledge”.

As well as geometry changes, mGear can transfer UV updates between versions of a character.

The plugin provides a fair degree of granular control: as well as native Maya attributes, users can choose to transfer those from plugins like Arnold, or custom attributes. 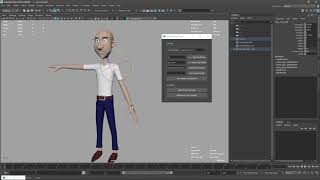 There are also new options itended to make the elbows and knees of rigged characters more compatible with common game engines.

Availability and system requirements
mGear is available now via an MIT licence. The framework works with Maya 2016.5 and above running on Windows, Mac OS X and Linux. At the time of posting, Maya 2019 is only supported on Windows.

The source code has been refactored for mGear 3.0, which may break backwards compatibility with previous releases. You can find more information in the videos on the mGear YouTube channel.