Wouldn't you want to work in a place like this? We take a peek at some of the coolest murals from offices around the world...

It's well known that your office or studio environment has a big impact on the work you create. A dull or unpleasant workspace can dampen your mood and hamper your creativity. On the flip side, a well planned, creative environment can inject energy into the workforce and inspire the imagination.

All of the businesses showcased here have taken this to heart, and injected some flair into their offices via imaginative murals. While an awesome workspace won't necessarily equal a top-notch design portfolio, it definitely doesn't hurt. For more envy-inspiring workspaces, take a look at our article on the coolest design offices around the world. 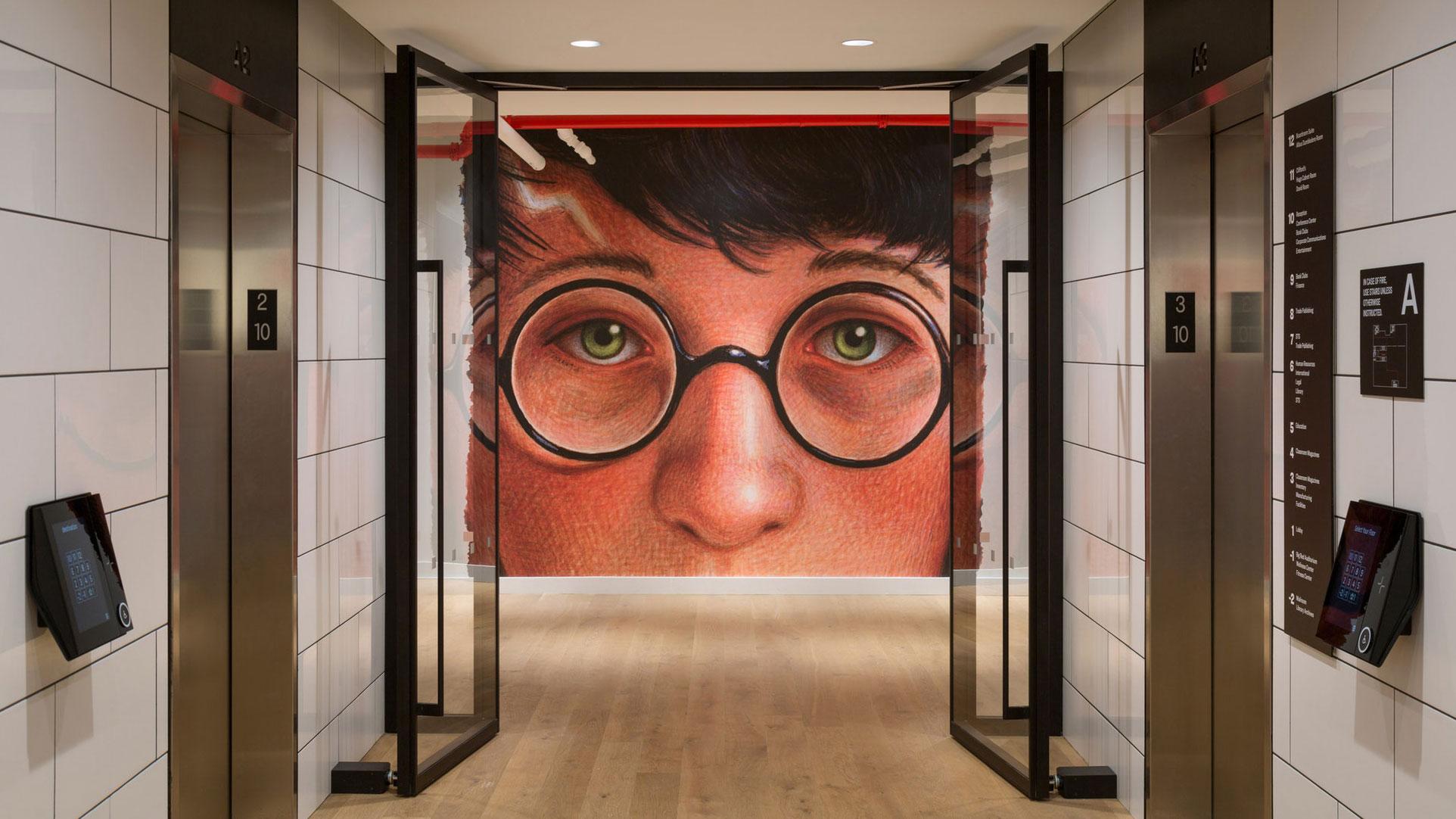 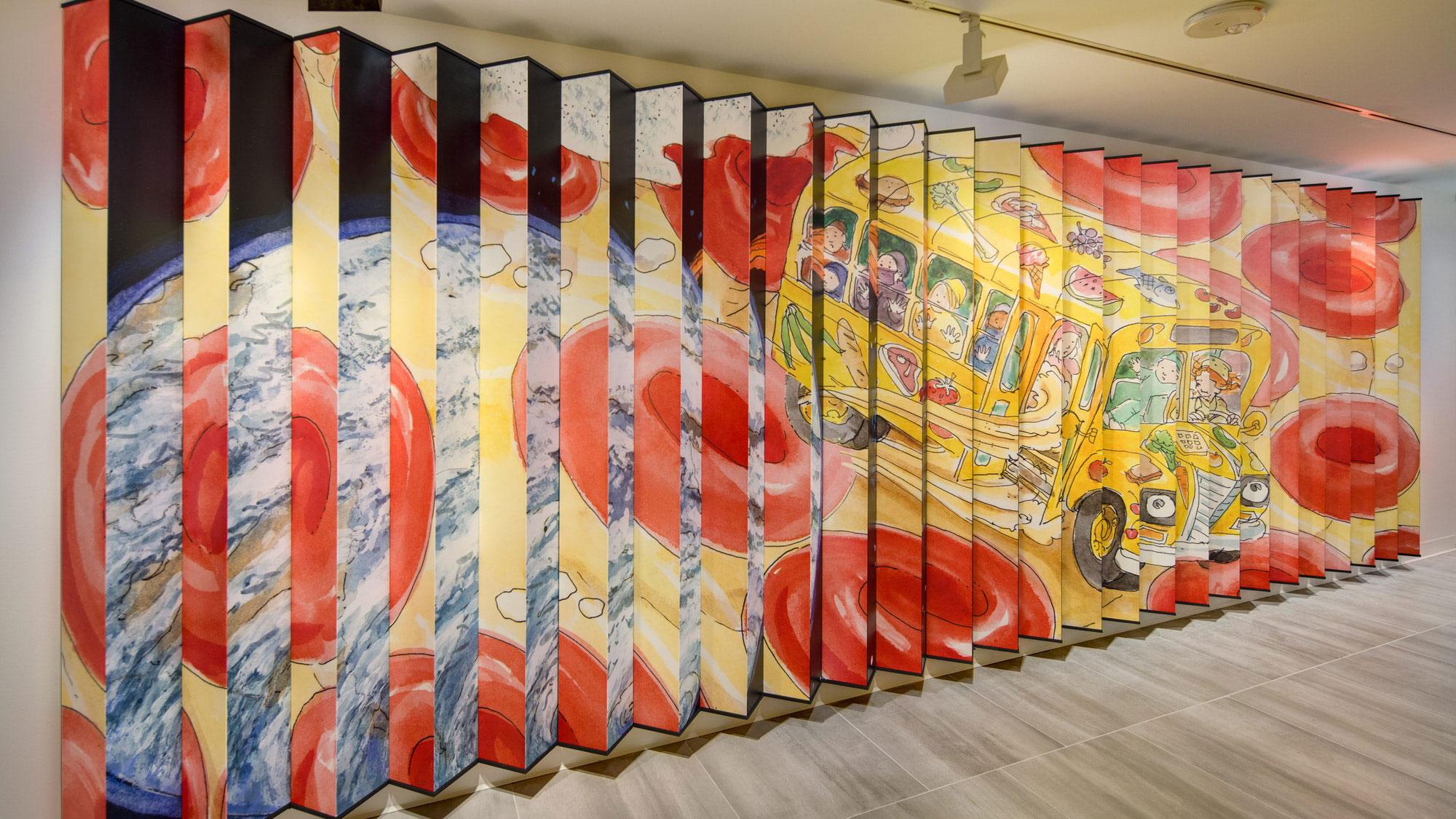 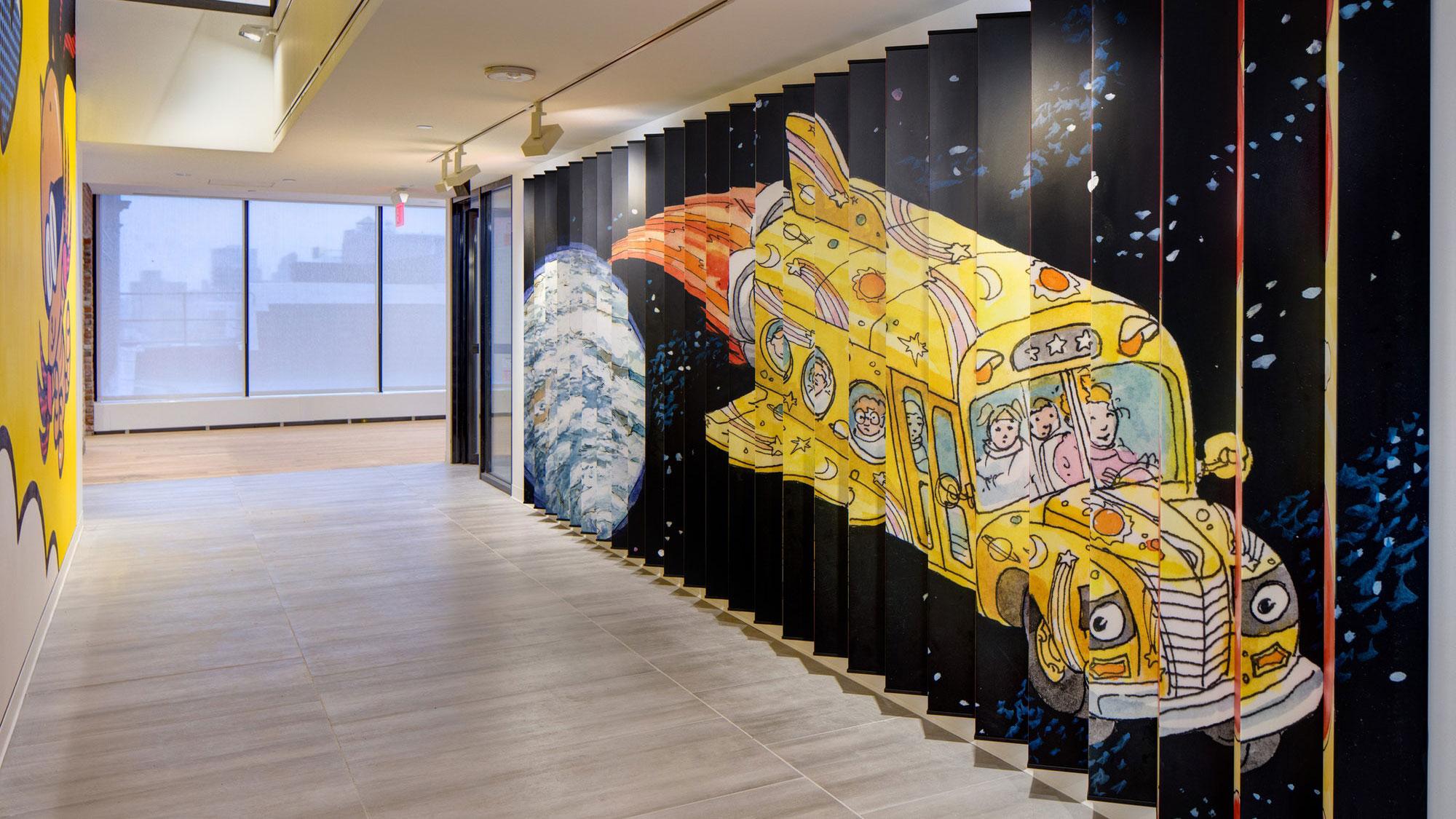 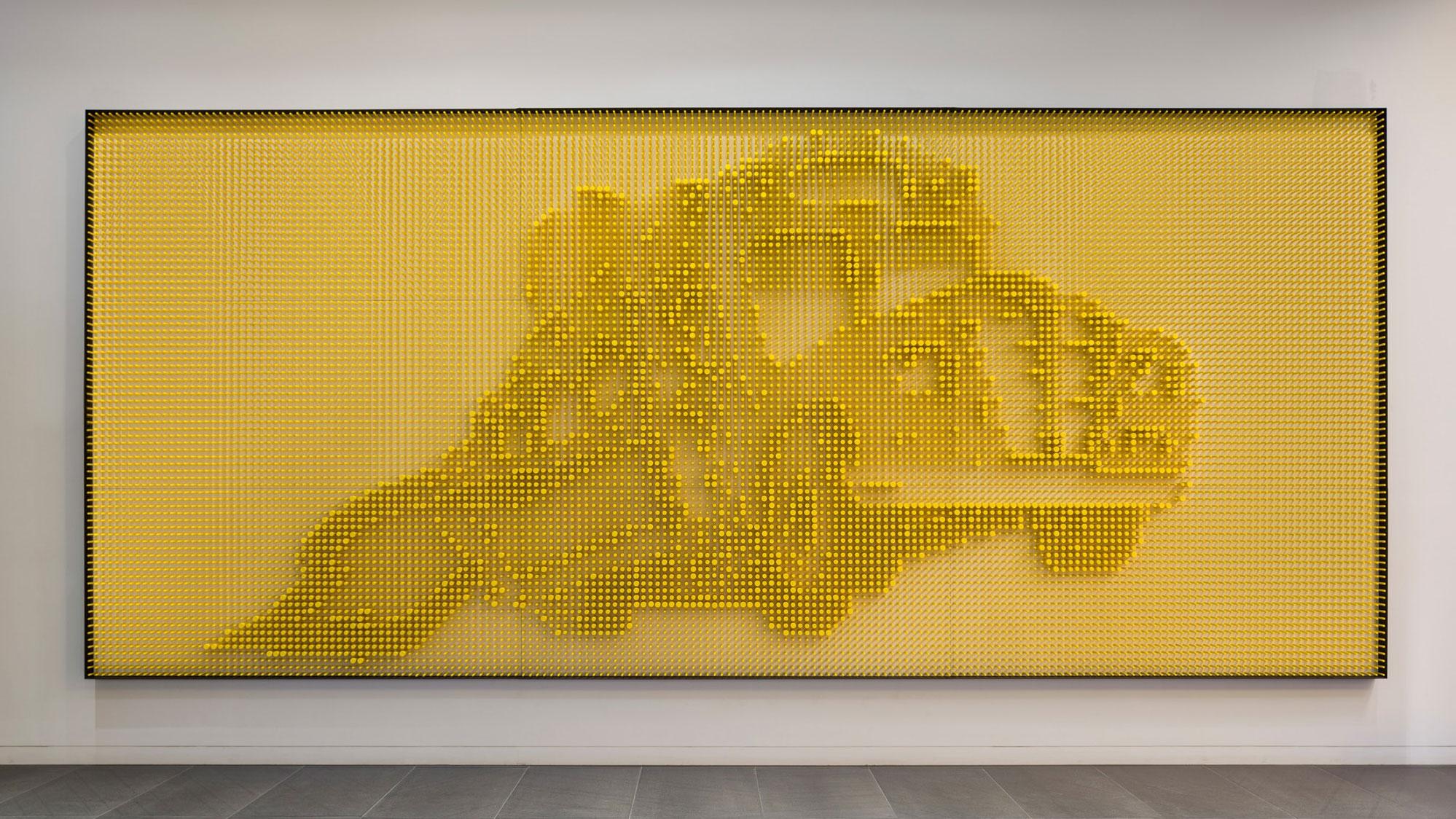 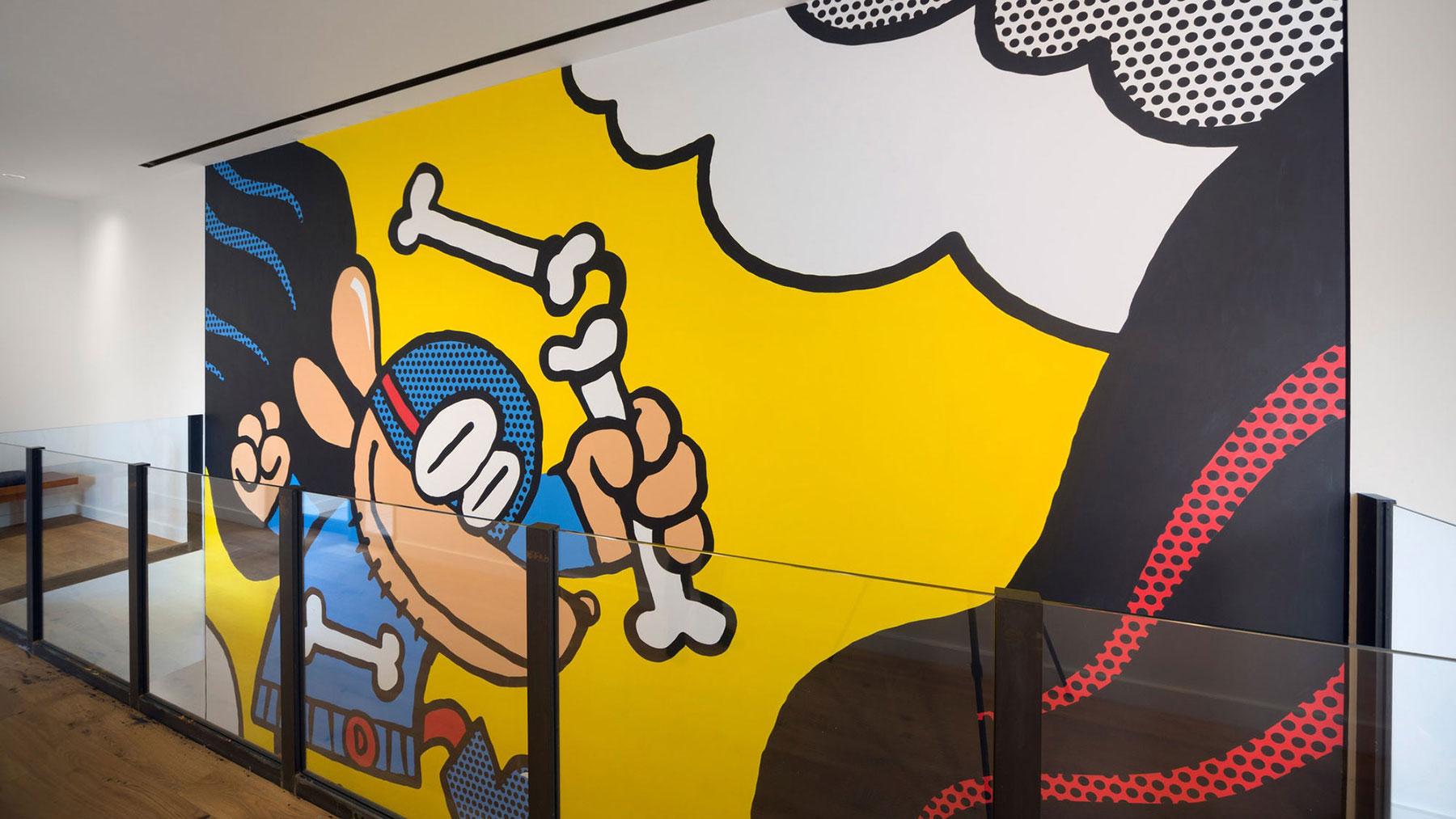 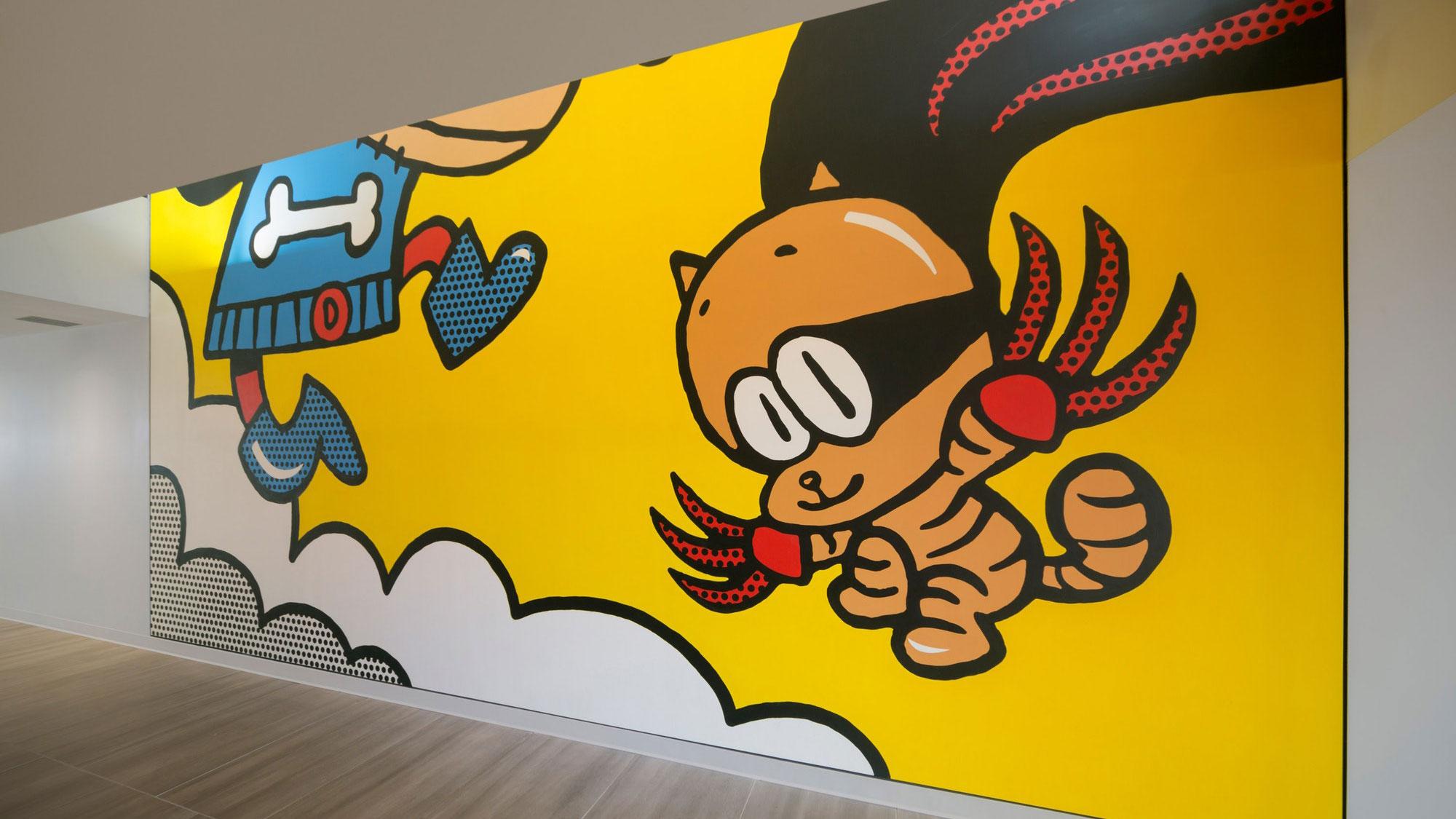 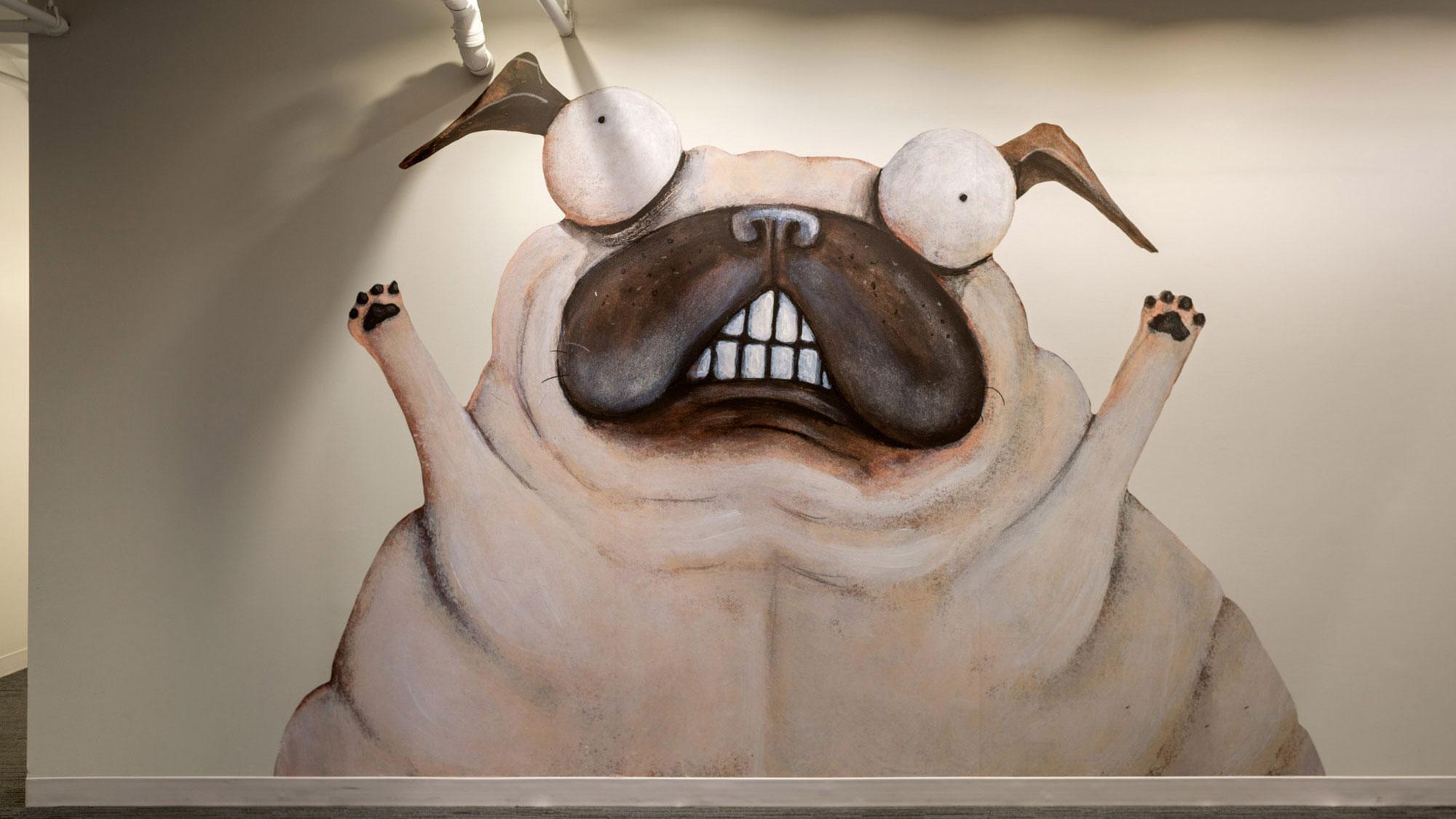 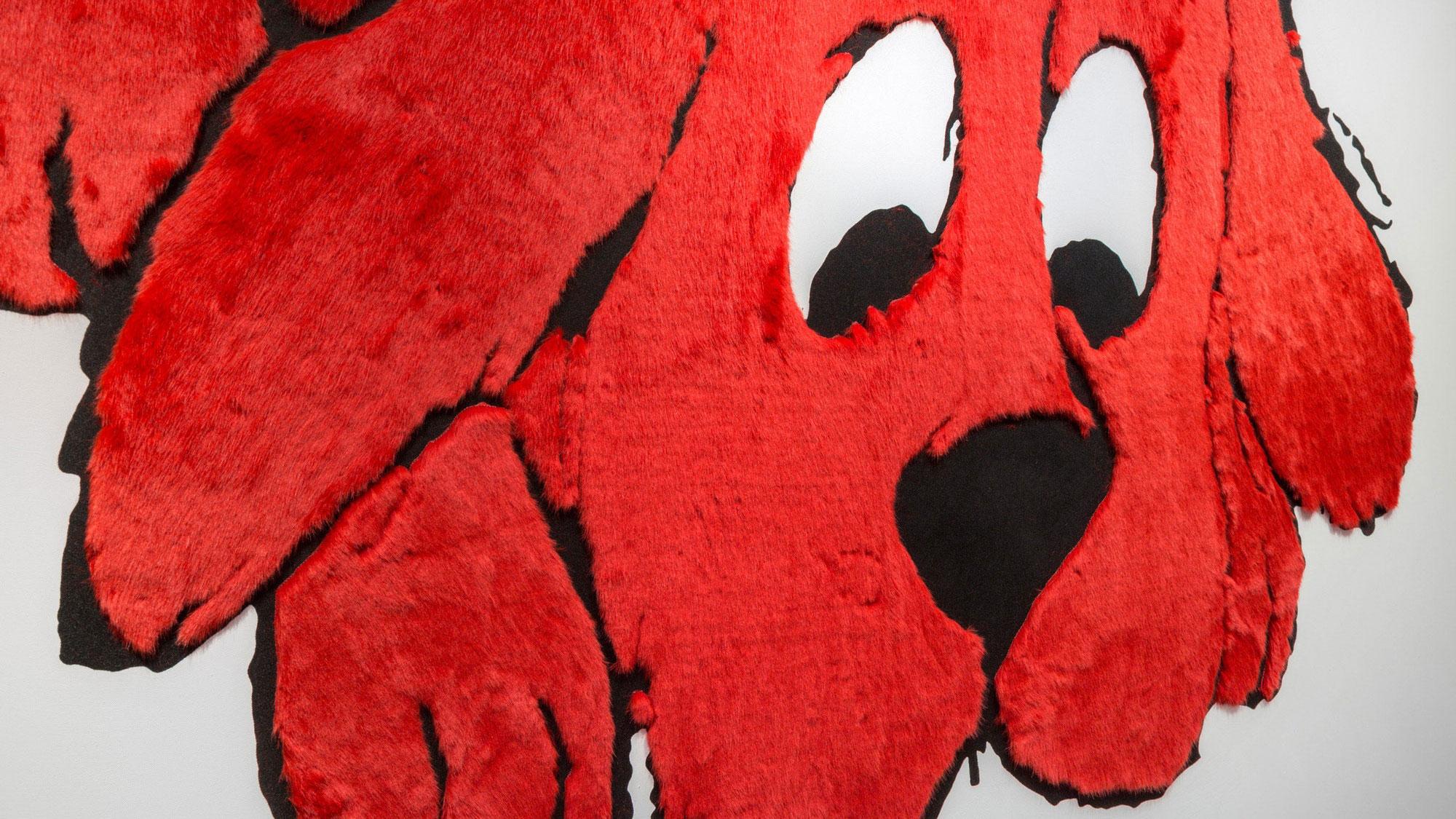 Scholastic is the largest publisher of children's books (and home to the world's most famous boy wizard), so it had plenty of creative subjects to choose from when it came to decorating its offices. To do the job justice, Scholastic roped in Pentagram, which rose to the occasion with true style, creating a whole range of fantastic murals to appear all around the company's offices.

These aren't your bog-standard murals either – there are designs that spread across different floors, ones that transform depending on the angle you look at them from, and even ones made of fake fur. Use the arrows to navigate your way through the gallery above. 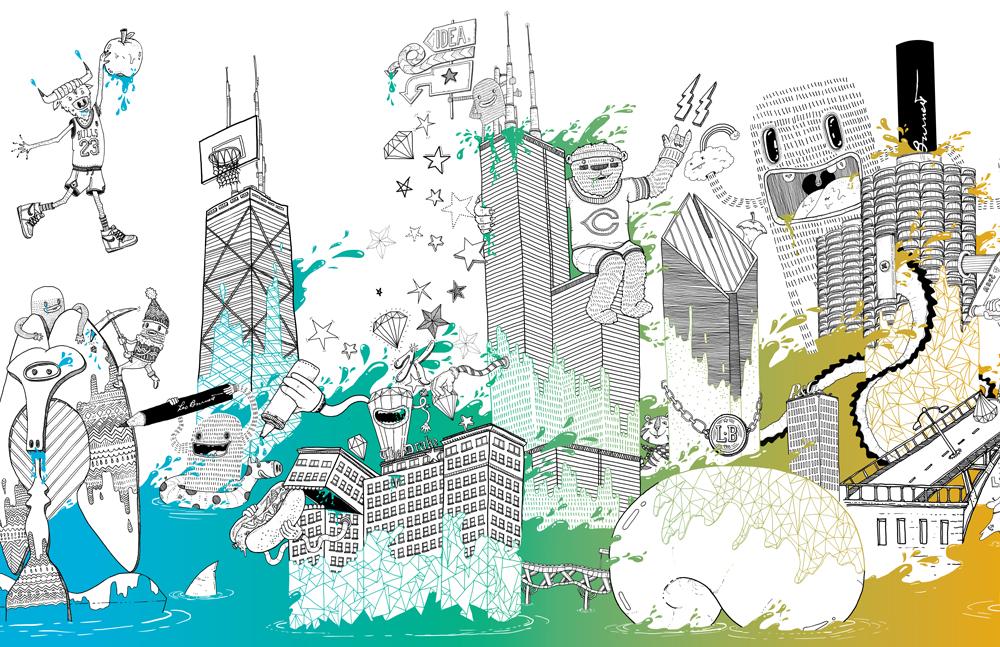 This show-stopping office mural adorns the reception desk of global advertising agency Leo Burnett's hub in Chicago. The imagery celebrates two sources of pride for the team: creativity and their home city. The mural combines Chicago's skyline and the agency’s own icons, such as Alpha 245 black pencils. 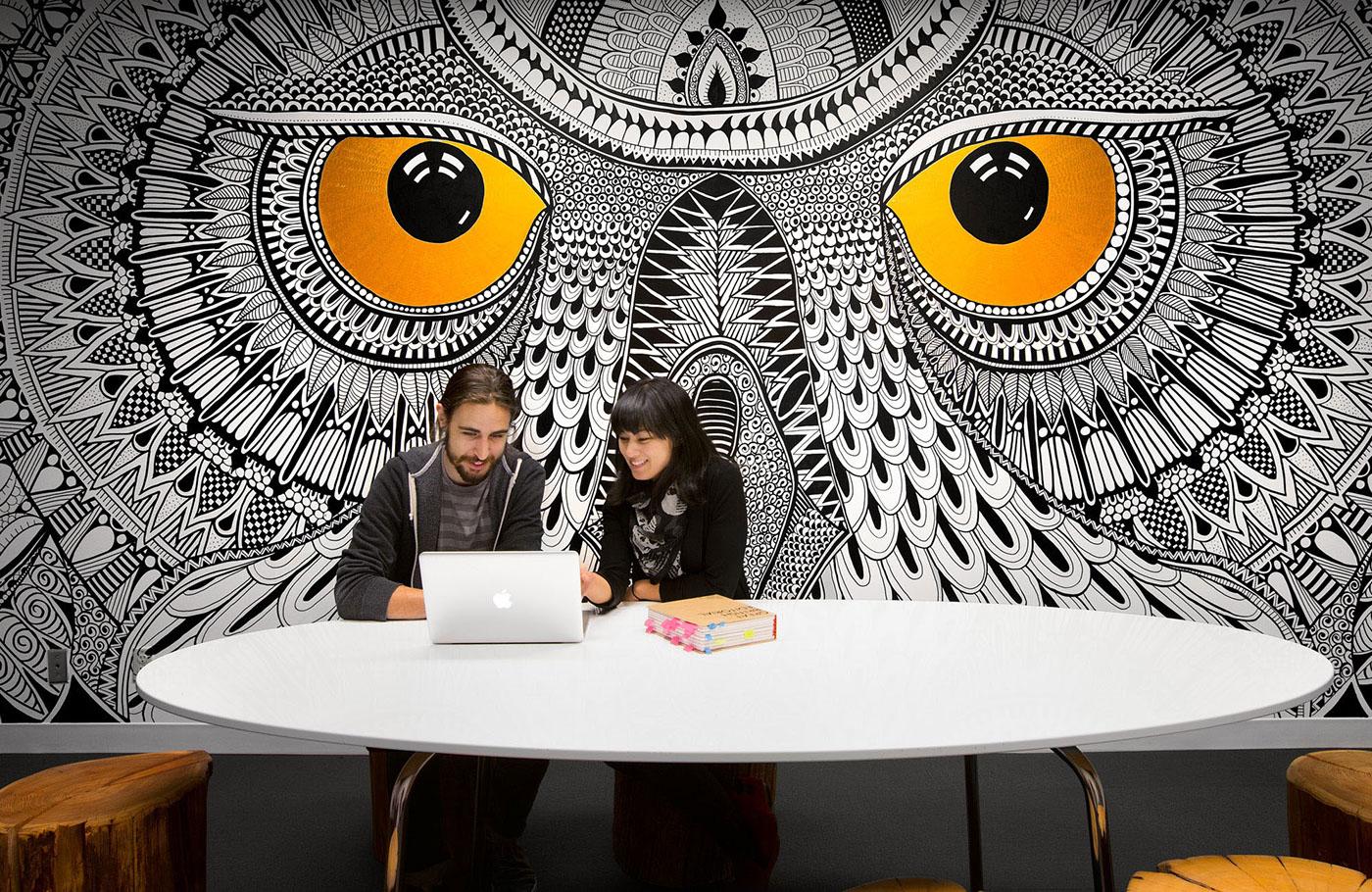 Inspired by an unexpected encounter with a great horned owl in Vancouver's Stanley Park, husband and wife team Steve and Sandy Pell completed this mural for Hootsuite's boardroom in just two and a half days.

Key to their design is the owl's piercing golden eyes, which caught their attention in Stanley Park. They hoped to evoke the perfect balance of intense singular passion, fear, excitement, the unknown and intensity. 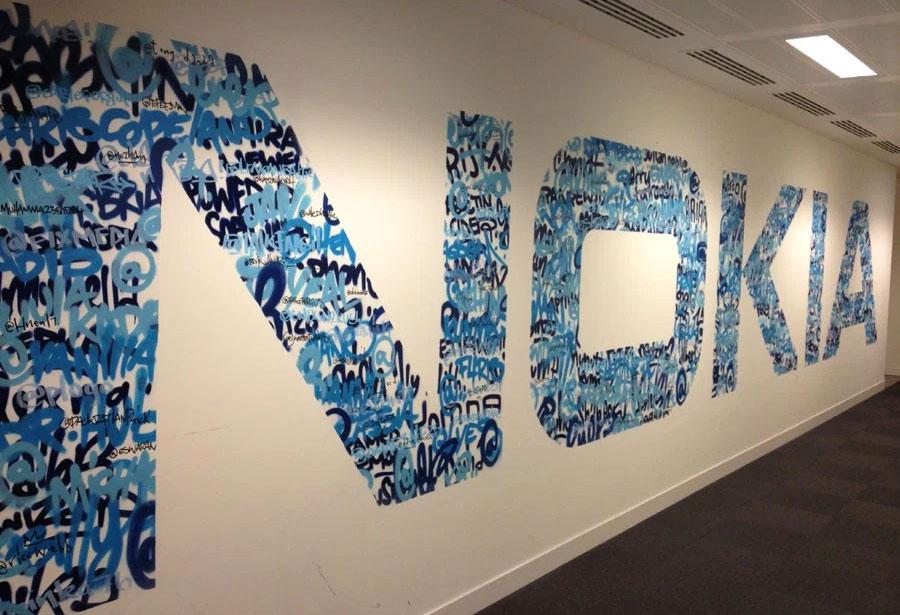 Graffiti Kings brightened up Nokia's office with an assortment of murals

London-based Graffiti Kings, headed up by pro graffiti artist Darren 'SER' Cullen (who also painted the stage sets for the London 2012 Olympics opening ceremony), was contacted by Nokia when it wanted its white office walls jazzed up with some magnificent and mind-blowing graffiti murals. So that's what Graffiti Kings did, including this fantastic Nokia logo created entirely out of artists' tags. 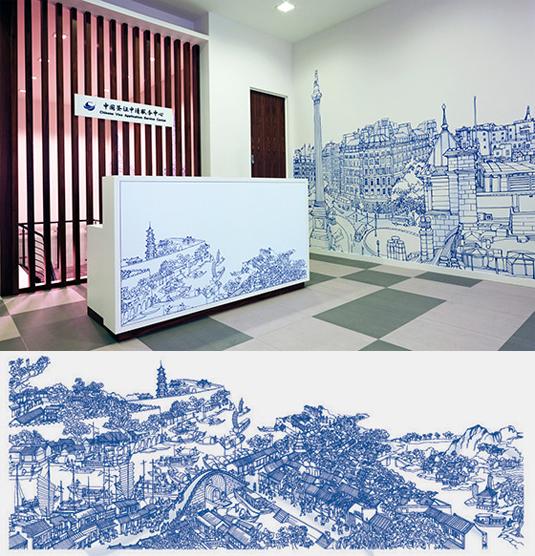 Cyprus based illustrator Abi Daker created this gorgeously detailed wall mural for the Bank of China. "My attention to detail and strong drawing technique means that my work is ideally suited to creating illustrated maps, panoramic cityscapes and perspective drawings," she explains. We love the use of a singular colour with this one.

Sweaty Eskimo is known for his colourful office murals

This brilliant office mural was created by Tahgasa Bertram, otherwise known as his illustration alias Sweaty Eskimo, for Pitch Marketing group's London office. Bertram has worked with a number of clients to produce some pretty inspiring wall murals. 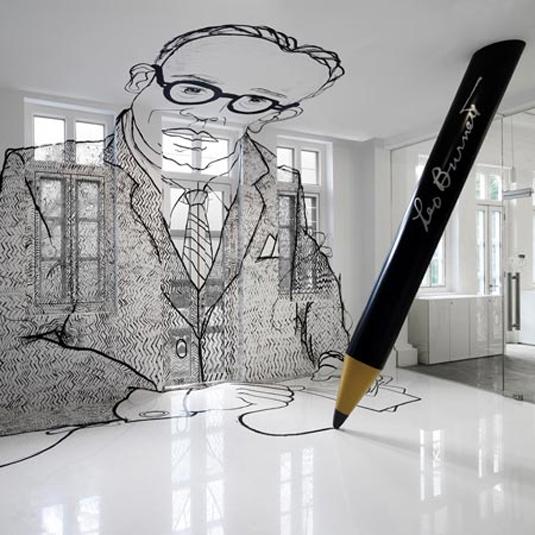 This wall mural features a huge illustration of the company's founder

We couldn't not include this eye-catching office wall mural. Singapore-based agency Ministry of Design completed this office interior for advertising agency Leo Burnett. It features a drawing of the company's founder spread across the walls and floor, wielding a scaled-up model of a pencil. Incredible work. 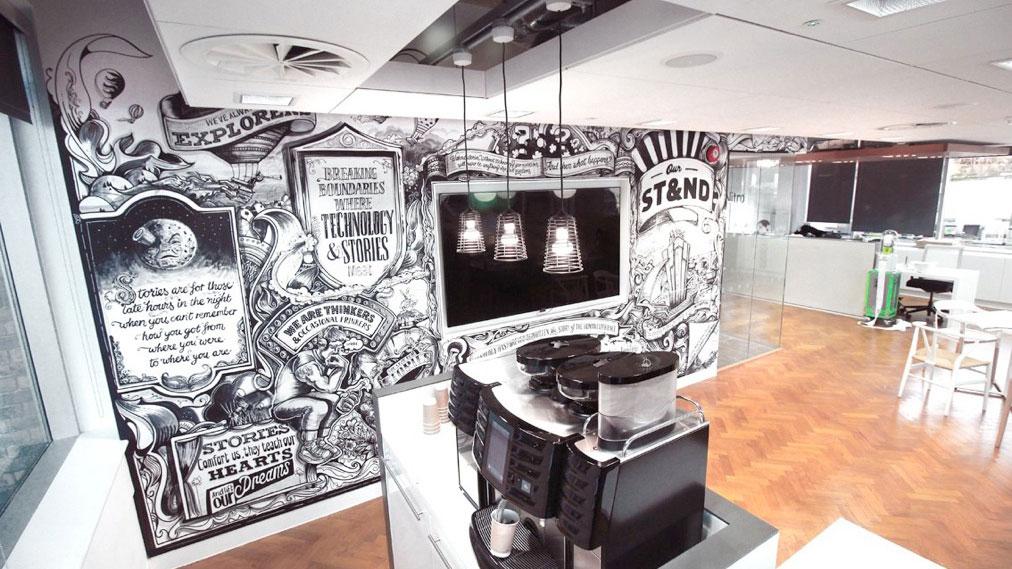 Vic Lee packs plenty of detail into his murals

London-based artist Vic Lee has created murals for companies and public spaces all around the world. One of our favourites is this intricate design for digital marketing company SapientRazorfish's HQ. Lee is known for packing plenty of detail into his murals, as well as hiding in-jokes and personal references to each company. See more images and close-ups here. 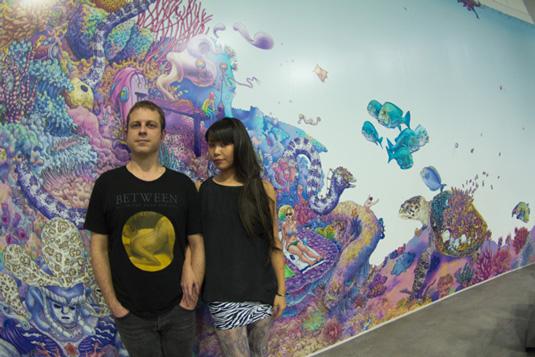 Who wouldn't want to walk past this on the way to their desk?

Husband and wife Dan and Kozue Kitchens are the couple behind Kozyndan, an LA-based artistic team, known for their digitally painted pencil drawings of contemporary urban cityscapes and surreal interior spaces. On a larger scale, the duo created this 45-foot underwater-inspired mural for PR company The Audience in LA. 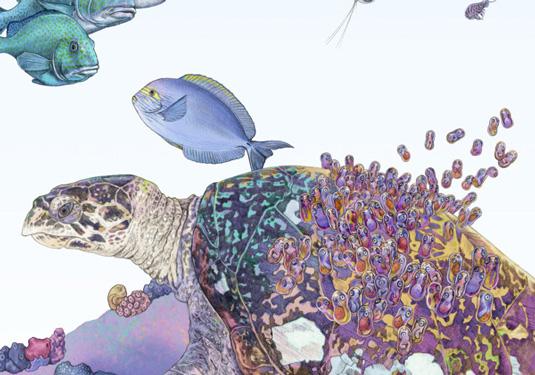 This piece is seriously impressive, not only for its scale but for the huge amount of intricate detail. Each time we look at it, we find new weird yet wonderful illustration we missed previously. How the team who work in this now aptly-named 'fish bowl' office get anything done we'll never know! 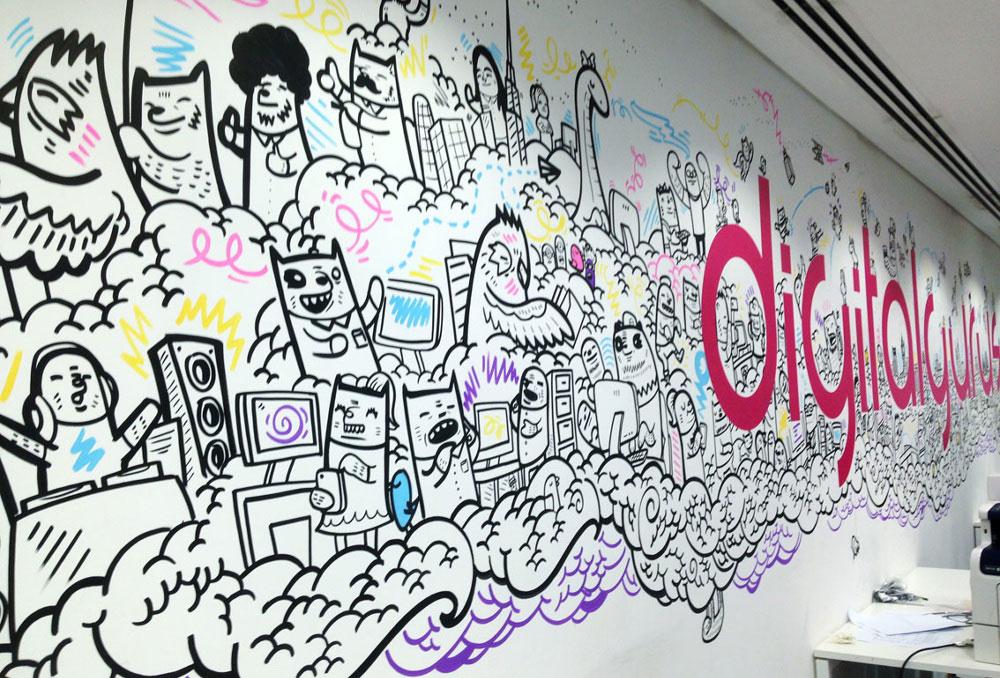 Meetings are less boring with something to look at

Digital Gurus is a collective based in London, specialising in mural art. It has an impressive client list that includes the likes of Google. It needed something really special for its own offices, and delivered on an impressive scale. This is just a small section of the mega-mural that spreads across the whole Digital Gurus studio, covering walls, pillars, and even lifts. You can see more photos of the mural here. 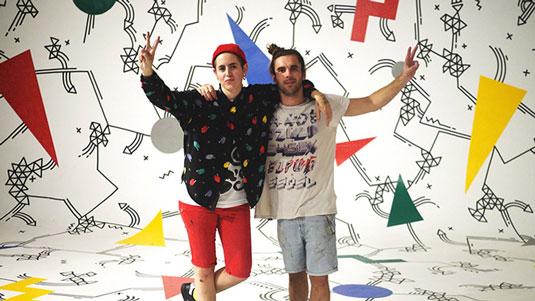 Google has called upon many talented current designers and creative to bring in a bit of life and energy to its workplaces. Kate Moross combined trademark visuals with the search engine's iconic colours to produce this fresh and exciting mural for Google's New York offices. 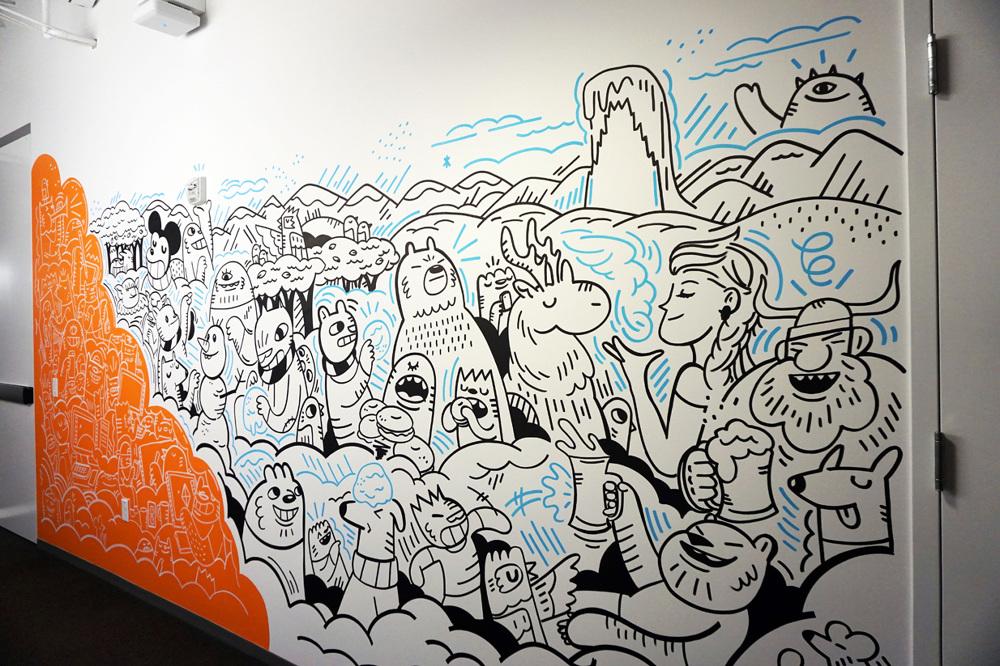 Doodle art enthusiast Geo Law was commissioned to create a massive 36m long mural for the Walt Disney Animation Studios technology department in California. Explore the full mural here – there are plenty of classic Disney characters to spot, all reimagined in a new style. 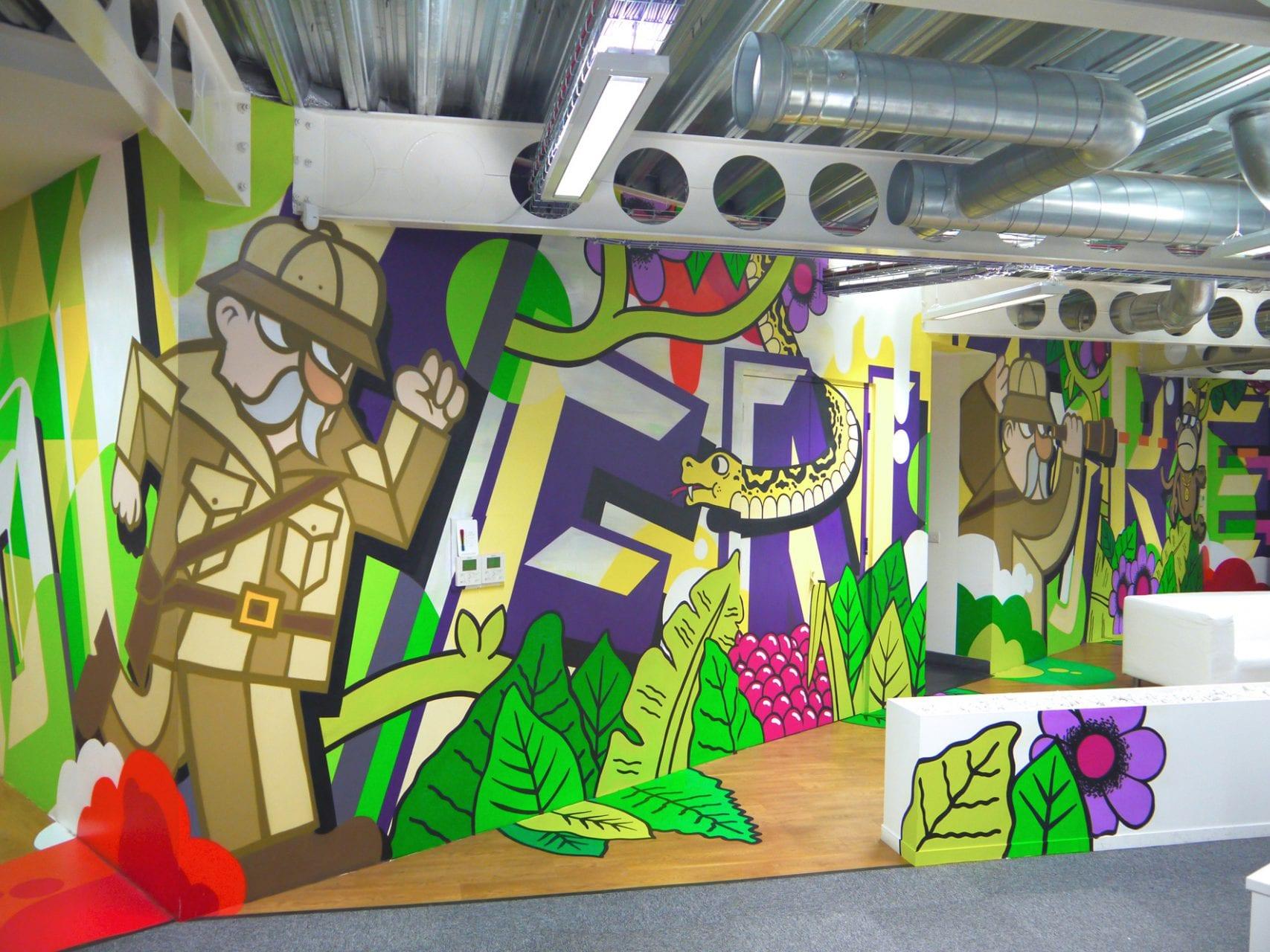 The design was focused around the words 'adventure', 'graphical' and 'timeless'

Design and project management agency NeosCreative wanted an inspirational and unique mural for its new West London office. It commissioned Soulful Creative, a collective of some of the world's most talented and experienced graffiti artists, illustrators, and contemporary artists, who produced this funky masterpiece. 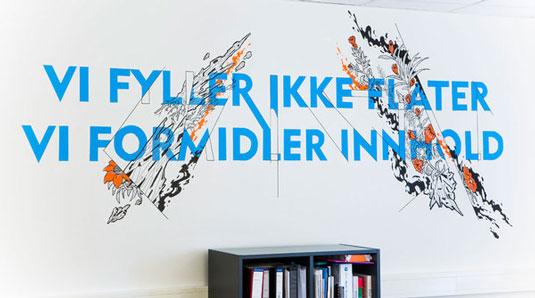 The theme of the mural is 'redefining media'

Norwegian illustrator, graphic designer and art director Remi Juliebo created this beautiful design for the office walls of Oslo-based advertising agency Carat. Juliebo decorated five walls with different murals – some based around illustrations and other including typography – all based around the theme of 'redefining media'.