The software, which Nekki uses on its own mobile fighting games, will enter closed beta in February 2019.

Create animations based on real-world physics
Unlike conventional animation tools, Cascadeur encourages users to focus on physical properties like a character’s trajectory, angular momentum and fulcrum points like ground contacts.

Once the key poses in a move are established, the software – the name means ‘stuntman’ in French – generates a plausible-looking motion connecting them.

Artists with long memories may be reminded of endorphin and euphoria, NaturalMotion’s motion-synthesis software and its games middleware, neither of which is now available commercially. 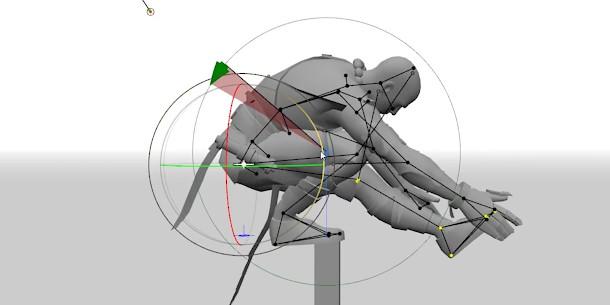 Users can also choose to violate the laws of physics for artistic effect: in the image above, the red sector shows the difference between the pose shown and that expected in the real world.

A shallow learning curve for Maya users?
Despite the differences in underlying philosophy, Nekki says that most of the animation tools within Cascadeur should be familiar to artists coming from other DCC applications, like Maya.

The video above shows a fairly conventional-looking Dope Sheet to display key frames, and standard move and rotate gizmos for joints in the character rig.

According to Nekki, the rig “allows you to use on any part of the body at the same time both direct and reverse kinematics, switching the type of kinematics at any interval”.

Rather than a separate graph editor, the trajectories of each joint can be displayed directly in the viewport, as in Akeytsu or when using Maya’s motion trails system.

Neighbouring frames can be ghosted into the view, helping to refine a character’s silhouette during a move.

Once an animation is complete, it can be exported to a game engine or other DCC software in FBX format, although Nekki says that it aims to support USD in future. 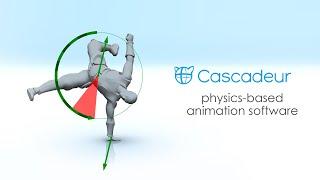 Well suited to stunts, but can be used for other types of motion
Cascadeur’s key use case looks to be stunts where a character is off the ground for an extended period of time, with Nekki describing it as having a “unique set of tools” for jumps and landings.

However, the firm says that it can be used for other types of moves: in its mobile title Shadow Fight 3, it was used to create kicks, punches and weapon animations.

Pricing and availability
Cascadeur is due to enter free closed beta in February 2019. Anyone interested in testing the software can register via the link below.

Nekki says that it hasn’t settled on a pricing model once the beta ends, but that it currently aims to offer a free version for “indie developers, freelancers and any kind of non-commercial use”.

The ‘Pro version’ of the software will “probably [use] a subscription model”.