NewTek has released LightWave 2019, the latest version of its 3D modelling and animation software, adding a real-time bridge to Unreal Engine, extending OpenVDB workflow, and adding sculpting tools within Layout.

The update, which follows just over 12 months after LightWave 2018, is NewTek’s fastest ever turnaround for a major numbered release, and is intended as a trial run of the company’s new update policy.

As well as changes to scene layout, materials and lighting, it supports LightWave’s instancing systems.

LightWave isn’t the first DCC app to have a live link to Unreal Engine, but the bridge’s unique feature is that it enables multiple seats of LightWave to connect to the same copy of Unreal Editor, not just one.

NewTek describes the system, which is based on its NDI networking technology, as “the first ever real-time collaborative workflow between a 3D application and … Unreal Engine”.

Supported by new FBX import and export capabilities
The functionality is backed up by improvements to LightWave’s handling of the FBX format – another key way of exchanging data between DCC tools – including support for bones, hierarchies and animation layers.

Users can also now add to existing FBX files within either of LightWave’s component applications, Modeler and Layout, or build LightWave assets from multiple FBX files. 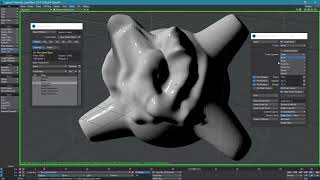 Jamil Halabi’s original demo video for Metamorphic. The digital sculpting toolset, previously available as a plugin for LightWave 2019, has now been integrated directly into Layout within LightWave 2019.


Sculpt corrective morphs for animations with the newly integrated Metamorphic toolset
The other major change in LightWave 2019 is the integration of Metamorphic, Jamil Halabi’s mesh sculpting and vertex map editing system, which was previously available as a plugin.

The toolset is multithreaded, and supports pen pressure to control the size, strength and hardness of the sculpting brushes, at least on Windows.

It’s geared more towards creating corrective morphs for animation than being a replacement for a dedicated sculpting tool like ZBrush, and has a range of features geared towards animation workflows.

Sculpt animation keyframes can be converted to Endomorphs, LightWave’s native morph animation objects, and can be interpolated non-linearly. 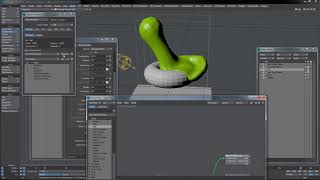 As well as simply importing and rendering existing .vdb files, users can now create their own OpenVDB content from “meshes, particles, and even the shape primitive distance estimator”.

OpenVDB volumes can be manipulated via LightWave’s Node Editor, with support for Boolean operations, and a range of filtering operations, including smoothing, dilation and erosion.

As well as creating clouds and atmospheric effects, the system comes with a gaseous fluid solver for generating smoke and fire, and can even be used as a quick way of generating proxies for scene layout. 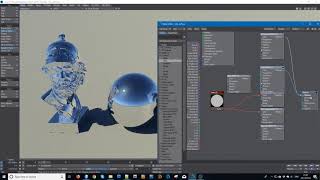 Updates to modelling, shading, lighting and rendering
LightWave’s Modeler application gets a set of new tools for manipulating UV maps – you can find a list via the link at the foot of the story – and support for the UDIM format used by tools like Mari.

Modeler also now supports smoothing groups, making it possible to control creases and edge curvature on a model, in the same way as in tools like 3ds Max or Modo.

The shading toolset has also been extended, with the option to edit Fresnel functions, material components – shown in the video above – or material integrators via the Node Editor.

There is also a new Edge Shader node, intended for simulating bevelled edges at render time, as with Modo’s Rounded Edge shader; and a Patina node for adding dirt or wear to a surface.

Outside of Metamorphic, character animators don’t get a lot this time round, but there is a new option to limit the number of bones that affect a given point on the mesh when exporting to a game engine.

For lighting, there is a Physical Sky and Sunlight system, which replicates real-world lighting conditions based on geographical position and time of day, in the same way as the equivalent toolsets in 3ds Max and Maya.

Some long-awaited updates to the UI and the Undo system
Workflow improvements include the option to navigate popup menus via the mouse wheel or arrow keys, or – in the case of very long menus – filtering and keyword searches.

The undo system also gets a long-awaited update, with unlimited undos now available in the Graph Editor, scene editors, Dope Sheet and “many Layout navigation tools”.

Support for Hi-DPI displays has been improved, with “many UI elements” now scaling to high-resolution displays; and support for independent scaling on multi-monitor set-ups.

The first of a new series of shorter release cycles?
LightWave 2019 is notable for being the fastest ever major update in the software’s history.

Following the debacle of LightWave 2018 itself – three years in the making, including long periods of radio silence from NewTek – the entire LightWave 2018.x release cycle was wrapped up in just 12 months.

According to NewTek senior manager of communcations Chuck Baker, it marks a shift away from the firm’s old policy of free, feature-rich point updates, but erratic, infrequent major releases.

In a post on the LightWave forum, he commented: “I’m sure most folks have understood that even … years ago, doing such extensive feature-laden point releases … was not a sustainable business model.”

“So the experiment this past year was a reasonable group of maintenance-only releases, and the new ordinal for early in the new year. We are committed to LightWave for the long haul, so we are thinking and working toward developing and moving to a sustainable business model.”

Early user response to the update has been almost uniformly positive, at least on the LightWave forum itself, with particular praise for the speed of the update, and breadth of the changes.

As you might expect, feedback on external forums is more muted – ‘catching up to rather than outstripping the market’ might be a reasonable summary of the main criticism there – but even so, there seems to be a general consensus that LightWave 2019 looks to be a very solid release.