10bit FX has unveiled new ray tracing features in Notch 0.9.22, the next major update to its line of real-time motion-graphics authoring tools, which is due for release in March.

The technology is based on DirectX 11 and is hardware-agnostic, being designed to run on any current GPU.

Other new features in the release include distributed rendering, native support for Substance materials, and automatic transcoding of imported video footage.

Notch Builder, the new-ish authoring tool built on the Notch engine, provides users with a node-based environment for setting up motion graphics systems and simulations.

It imports geometry in OBJ, FBX or Alembic format – it doesn’t have its own modelling toolset – and is designed to integrate with other DCC software, including Cinema 4D, RealFlow and Blender.

We wrote about the software last year, so check out our original story for more details.

To that, the upcoming Notch 0.9.22 release will add real-time – or at least, semi-real-time – ray tracing, intended to improve the visual quality of output.

In the video above, recorded at last month’s NotchCon user event, company founder Matt Swoboda describes it as providing a “really high quality lighting workflow that was previously not possible”.

The functionality supplements the existing render engine rather than replacing it: the camera view is rendered with the standard renderer, then ray tracing is used for secondary effects.

Those include real-time reflections and refraction, and ray traced ambient occlusion.

Not based on Nvidia’s RTX technology, but loosely inspired by it
The functionality is based on DirectX 11 and is hardware-agnostic, being designed to work with existing graphics cards from any manufacturer.

In his talk, Swoboda says that development was partly inspired by Nvidia’s work on its RTX real-time ray tracing architecture, now used in a range of professional and consumer GPUs.

“They figured out how to do some really useful effects without [needing] tons and tons of rays,” he said.

10bit FX ultimately decided not to base Notch’s ray tracing engine on RTX, with Swoboda citing the lack of support for DirectX 12 – RTX is a hardware implementation of DX12’s DirectX Raytracing functionality – in current media servers, and the difficulty of scaling to very high output resolutions.

Notch’s own ray tracer is targeted at “semi-real-time” work: as well as generating final-quality images, the engine is intended for baking lighting and video rendering.

While the engine can be used in real time at lower resolutions, Swoboda commented that for 8K+ output, ray tracing workflows “probably aren’t going to come into play for the next couple of years”.

You can see a live demo of the engine from 19:10 in the video, although the earlier section is also worth watching as a summary of the current state of real-time ray tracing and render denoising in production. 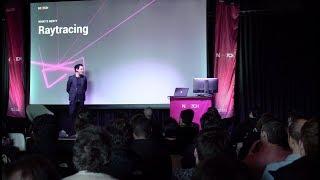 The functionality is intended to make it possible to use Notch on very large render canvases – “16K and beyond” – when creating live visuals.

Other changes include support for non-Unicode text, changes to the timeline and curve editor designed to make them more familiar to users coming from After Effects, and improved baking workflow.

On import, the software will also now automatically transcode video footage in formats that it doesn’t support natively to Notch’s own NotchLC codec.

Pricing and system requirements
Notch 0.9.22 is due to ship in March for Windows 7+.

Notch Builder is rental-only, with the Base edition costing £99/month (around $130/month) and the Professional edition costing £189/month ($247/month). You can see a feature comparison table here.