For some lucky creative agencies, the days of dull and drab cubicle spaces are long gone, with employers realising that inspiring surroundings can have a direct effect on their employees' creativity. They don't have to be located in famous buildings – a tranquil setting, games area, or amazing design office mural can all help to stimulate creativity.

Here we showcase 19 awesome design offices, which have been developed to accommodate all the creative needs of an artistic workforce. Why would anyone consider working from home when they could be grafting in one of these?

Website design firm Kinetic has been helping clients to implement internet technologies in innovative ways since 1995, so it makes sense that it has a suitably out-there office. "When we outgrew our original space down the street, we felt it was time to really let our creativity run wild," says Kinetic founder Jay Brandrup.

"From the start, we wanted our space to be specifically designed for flexibility and productivity," he adds. With collaborative break-out spaces and private office areas sitting alongside retro pinball machines and steam rooms, this office finds a happy medium between work and play.

The rooftop area is a great place to relax 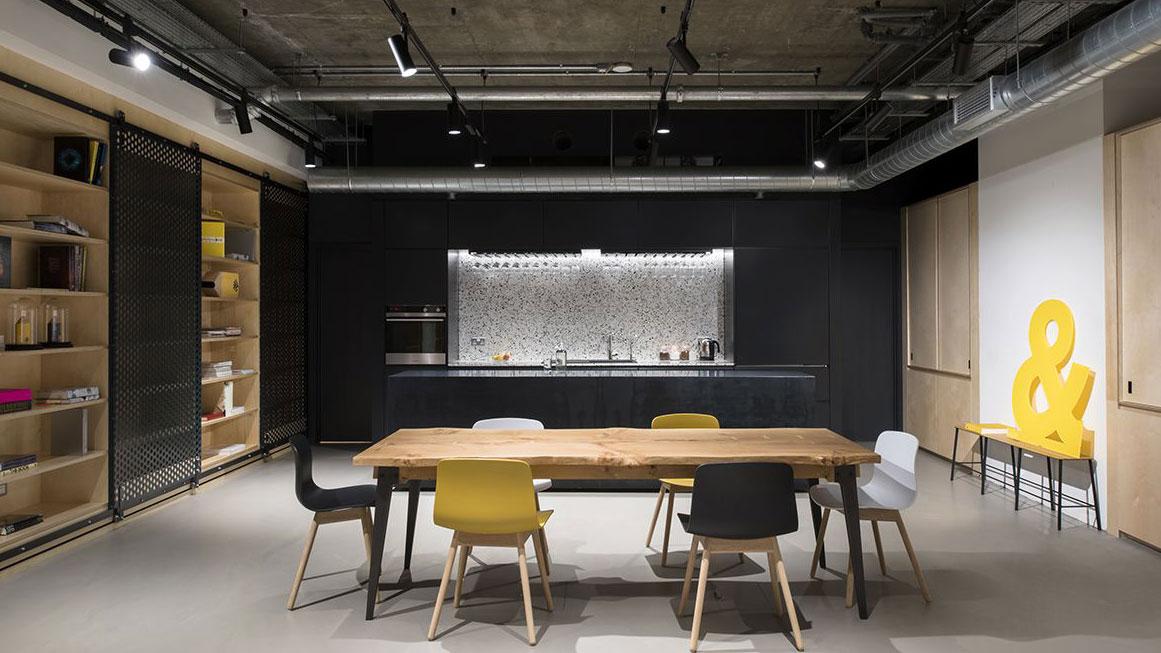 Yep, that's a bar behind the office table

It makes total since that those who champion the design scene need to have a pretty sweet office themselves. With this in mind, D&AD's headquarters in Shoreditch, London got an overhaul in 2017, with the help from architects Brinkworth. This allows the charitable organisation to have the flexible space it needs for its staff, but also the capacity to house events.

There are two levels, big yellow letters saying D&AD, a mural outside, a comfortable office space, a bar, D&AD Annuals and design books, plus plenty of room for events and mingling. What more do you need? 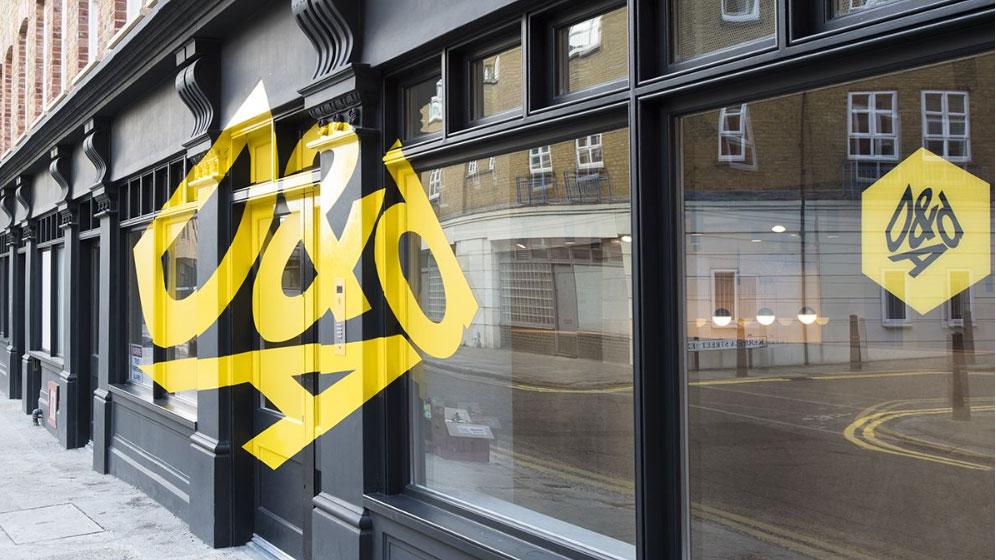 D&AD even makes a statement from the street

If you've ever felt like you'd love to work in beautifully refurbished former chemical factory in Buenos Aires, then Cinco is the office for you. The setting is a reminder of Argentina's "post-industrial revolution" golden period, and is flexible enough to allow the agency to work on a variety of tasks – the team have a workshop for working in paper, wood or with other tools, and a "study" space for talking pictures, film and experimentation. And then there's the "living room" for "meetings" – and we suspect, hanging out, as it contains a pinball machine and other games and puzzles.

The Barbarian Group's motto is, 'It’s gonna be awesome', and its design office doesn't disappoint. The studio brings together curious people from a bunch of different disciplines, so the workspace is geared towards collaboration. Architect Clive Wilkinson designed the sinuous, single 4,400 square-foot desk the whole group sits around as one team.

"We think of it as an undulating surface of awesomeness that keeps ideas flowing," says chief creative officer Edu Pou. "Some of our best meetings happen beneath the arches of the desk; these nooks really facilitate interaction and creativity.

"Working at the Superdesk is a constant reminder that good enough is never good enough. It keeps the tribe happy and inspired everyday. Our office is a piece of art for crying out loud!" 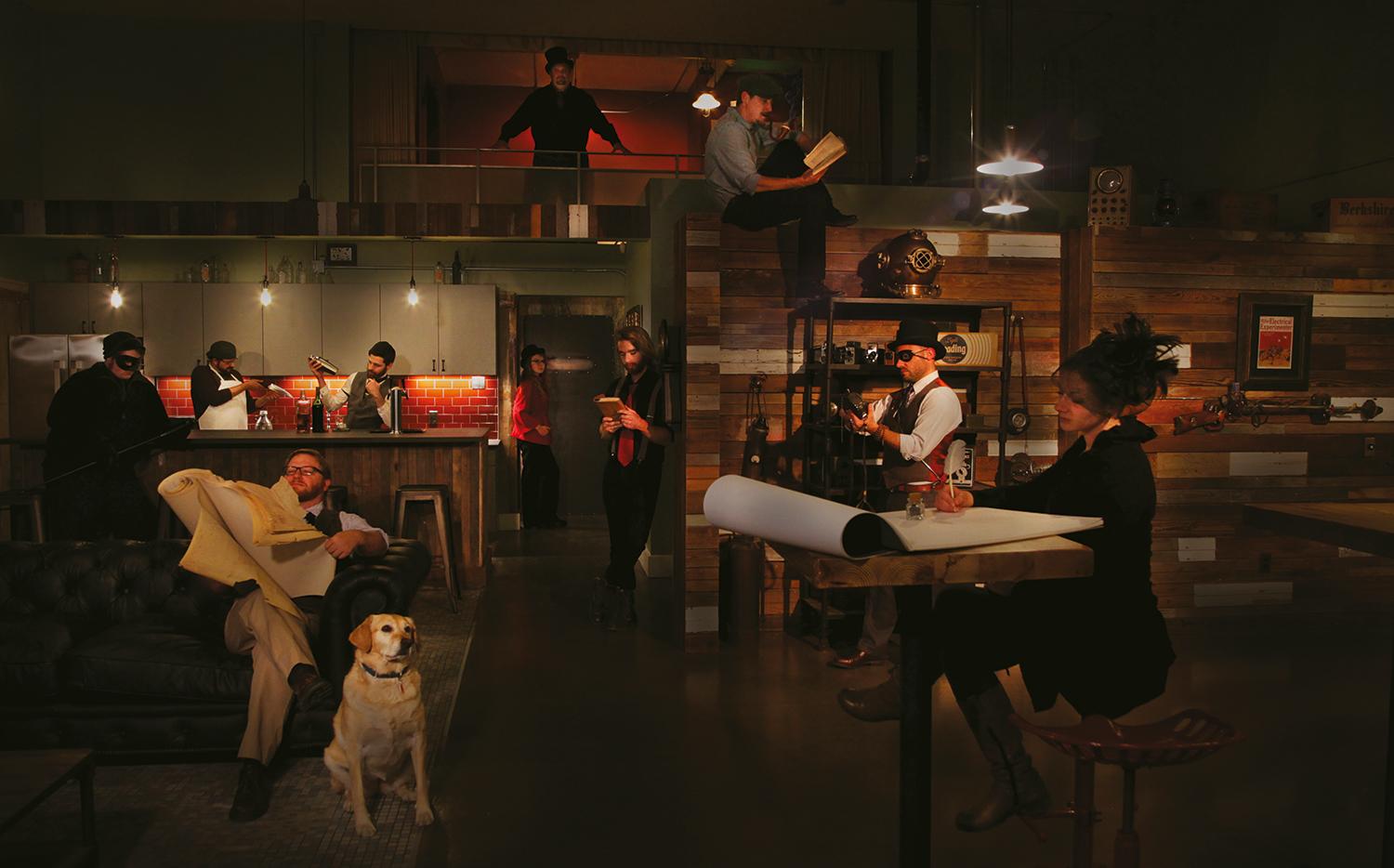 Neo-Pangea's design office is housed in a former bank building

Neo-Pangea’s sprawling studio is located several stones’ throws outside of Reading, Pennsylvania, in a renovated former bank building. An open, communal workspace is kitted out with custom-built desks made from steel and aged walnut planks, and the studio's data server is housed securely in what used to be the bank vault, complete with a lead-lined door.

"At Neo-Pangea, we believe that there’s always room for whimsy," says 'Lord High Vocabumancer' Jay Tremblay. "Visitors can find eclectic curios plucked from different eras of history hidden around every corner of the studio, just begging to be discovered." 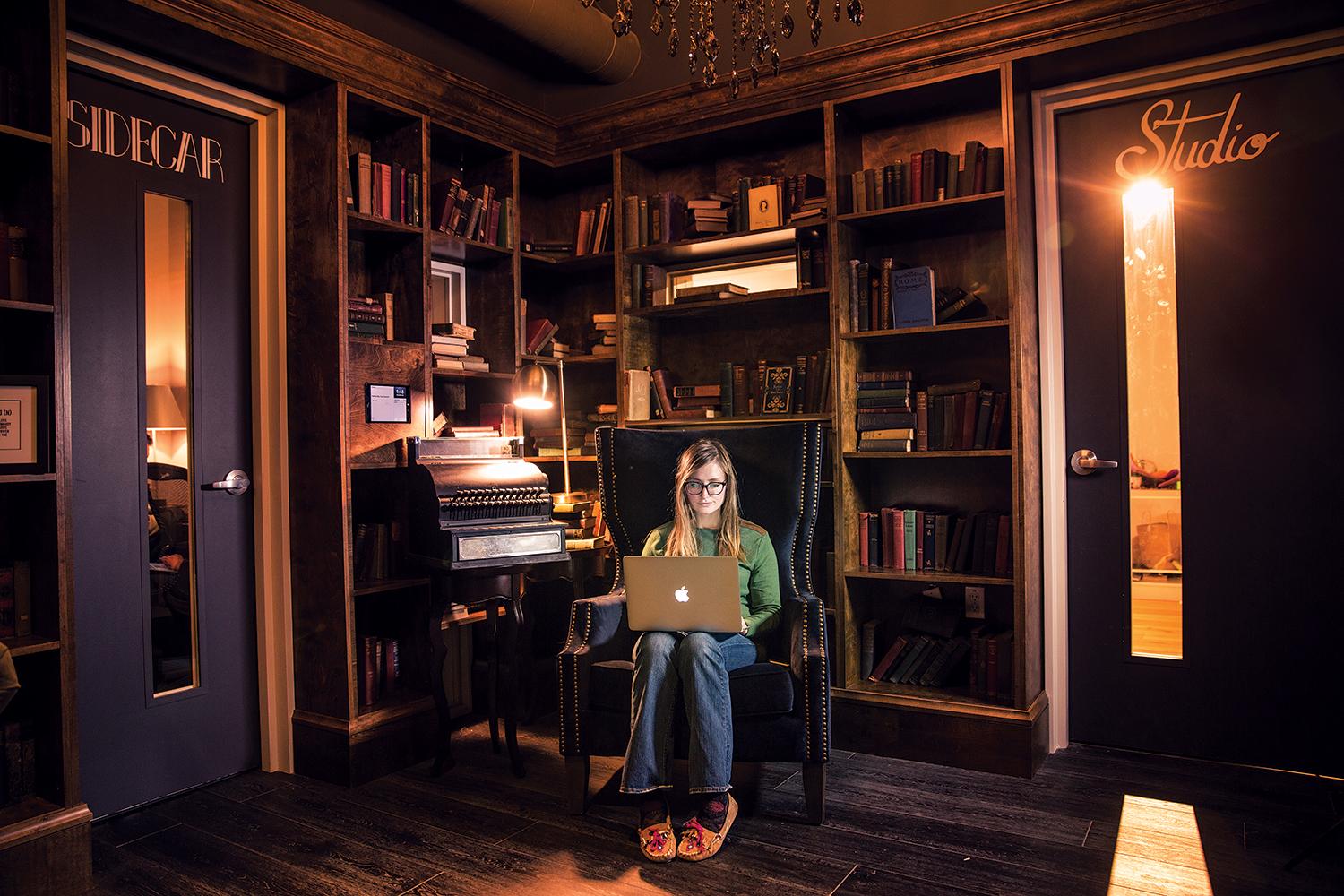 When ecommerce software company Shopify moved to a new headquarters in Ottawa, Canada, in 2014, it worked with a leading architecture firm to create an incredible design office. Each of the six floors has a different theme, including Canadiana and streetscapes, and there are plenty of nooks in which to work or put your feet up. Alongside this library on the speakeasy-themed floor, other rooms range from phone booths to Scandinavian sauna-style arenas. Employees can book them using Google Calendar, and reservations show up on iPads outside the door.

"As a company looking to change the future of commerce, we hold onto historical mementos like old-fashioned cash registers to remind us how far we’ve come, and how far we have to go," says marketing manager Courtney Symons. "And just like at home, we can wear moccasins to replace our snowy winter boots when we settle in during the long Canadian winters." 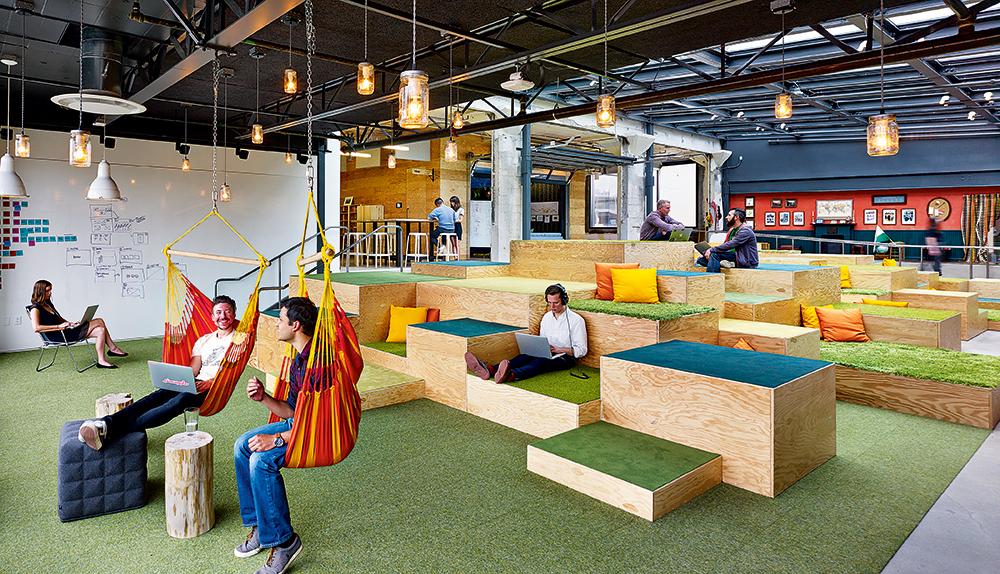 Most of the design team at Airbnb is based in this vibrant studio in San Francisco. "We work in what are essentially neighbourhoods built around large ‘project rooms’ that are modular spaces with displays, whiteboards, pinboards and tall tables," says vice president of design Alex Schleifer. "Everyone is free to pick up and work in the many open spaces distributed around the office. People are also free to change spaces by decorating them." 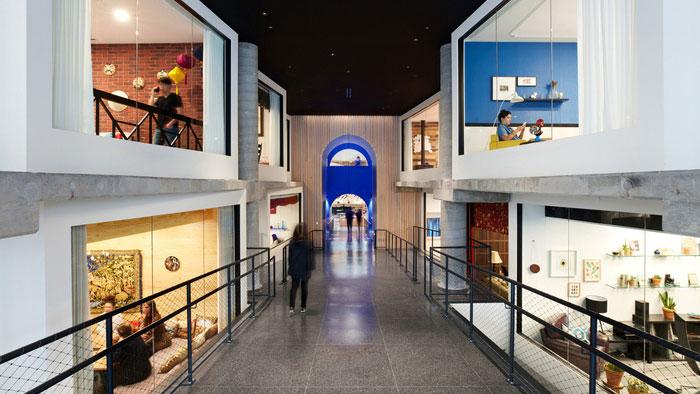 Fancy a stroll through this office? 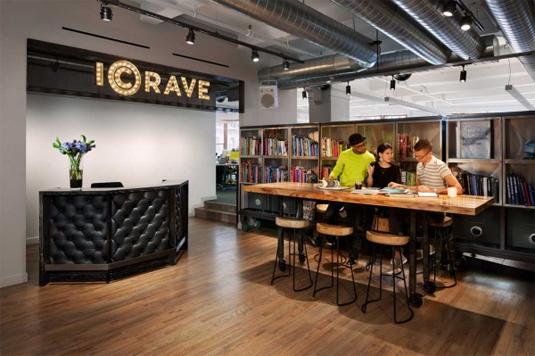 ICRAVE has an office space that we seriously crave ourselves. Image via Design Milk

Award-winning New York City-based design and branding firm ICRAVE combines minimalist aspects into its amazing offices. With areas designed to mimic hotel lobbies and the reception doubling up as a DJ booth, there are some seriously fun aspects to this interior.

The 8,000-square-foot space on Madison Square Park boasts flexible workspaces to encourage employee interaction and collaboration. Teamed with wooden decoration and cute chalkboards, it's an office we'd love to work in. 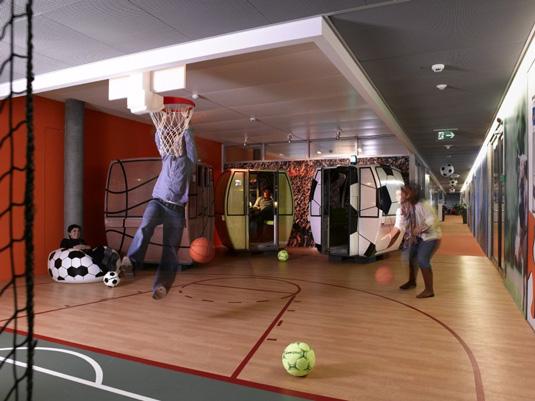 Google offices really are incredible places, so you won't be surprised to find more than one included in this list. But our favourite of all its designs has to be the Zurich offices. How any Google employees get any work done here, we have no idea.

There's rooms to play sports, sing and dance, get a massage, an aquarium where employees can relax in a foam-filled bath, a sky lounge, jungle and movie room, slides, fireman's poles and much, much more. But we also love the different themed Gondolas dotted around, which serve as meeting rooms. Amazing. 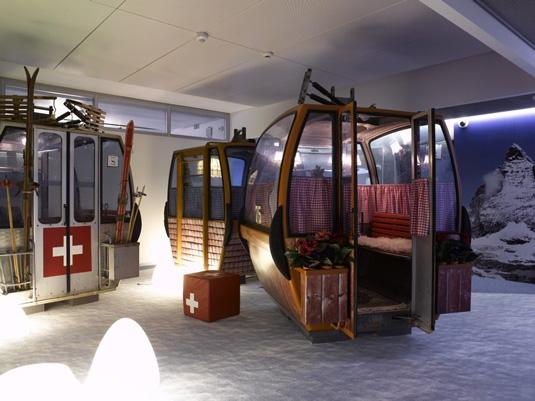 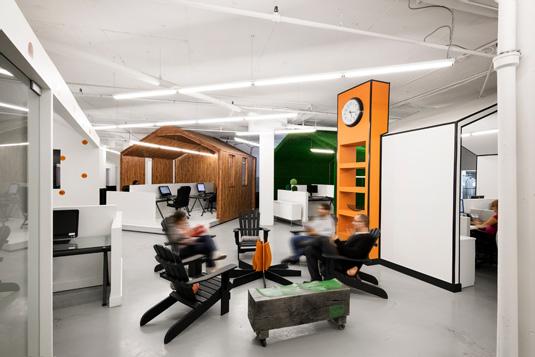 Montreal designer Jean de Lessard was recently commissioned to transform the offices of Canadian PR agency BICOM Communications into an area that inspires its employees and drives creativity. The result is this wide open space, filled with all sorts of stylish goodies.

The main feature of Lessard's design is the house-like pods, included to define work areas and each with their own decor, including fake grass and wood panelling. The company's social areas include some slick furniture as well as its name up in bright lights. 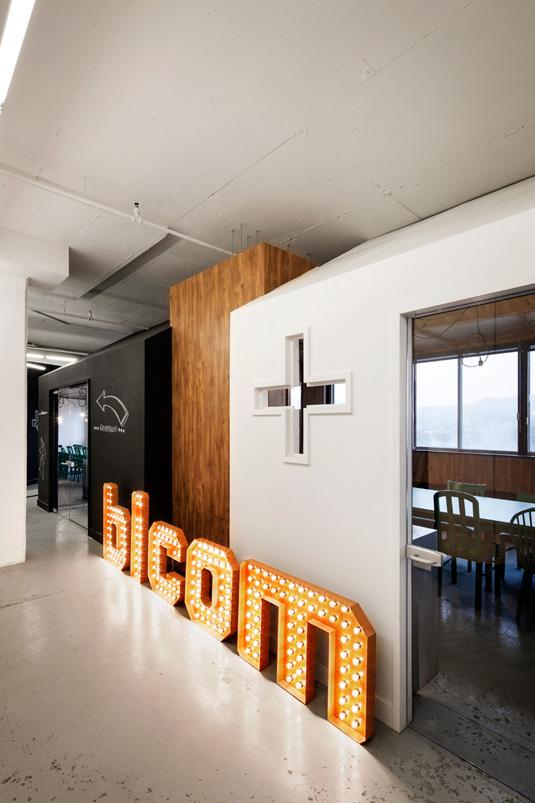 BICOM gets its name up in lights... 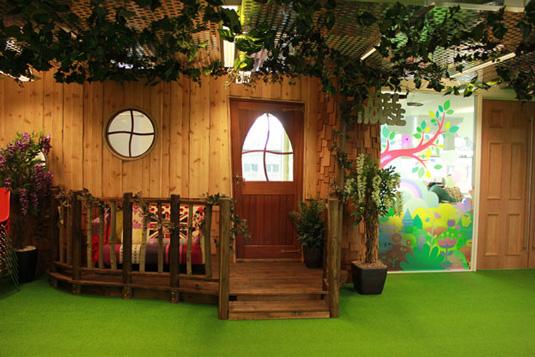 The Mind Candy offices feature this wooden treehouse, which doubles as a meeting room

This plant-infested palace is the office of game company Mind Candy. This is no ordinary workspace; the company's new headquarters is decked out with astroturf carpeting, vines hanging from the ceiling, a wooden treehouse and gingerbread house that double as meeting rooms, bright artwork around every corner, a colouring-in wall and quiet areas that look like hobbit holes. Last but by no means least, there's a helter skelter-style slide to deliver employees from one floor to another. Genius. 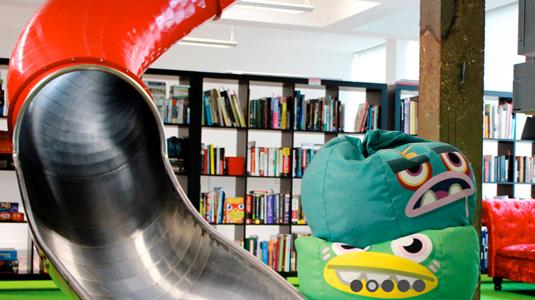 Who needs stairs when you can take this cool slide between floors? 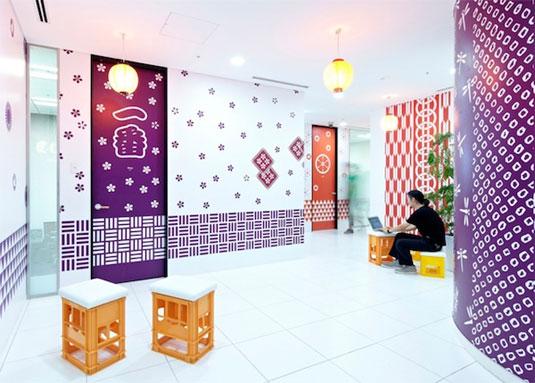 Gorgeous - but would you want to work here, or would the decor be too distracting?

Google Japan's office is adorned with loud patterns and bright colours as well as a few inspirational examples of furniture design. Each team has their own specifically designed area that continues the theme of bold, in-your-face design. Whilst this environment might not be to everyone's taste, it's still a pretty impressive office when it comes to the nine to five. 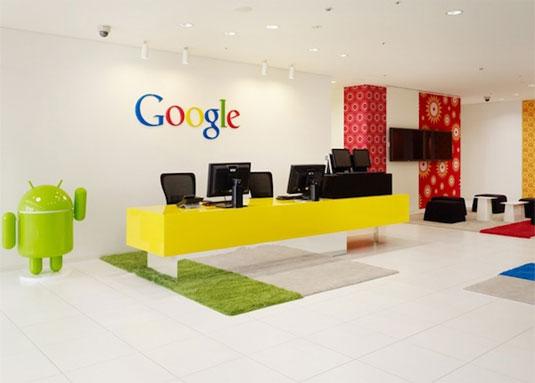 Adobe's 260,000 square foot campus got a brilliantly creative makeover by Rapt Studio back in 2013. This video documents El Mac completing his spray paint mural. It's a one-of-a-kind project that centres the entire building around a piece of street art. 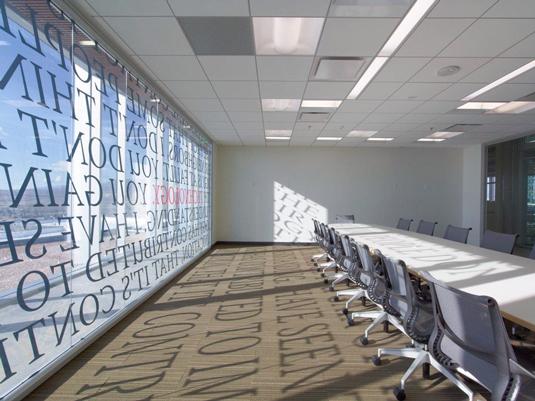 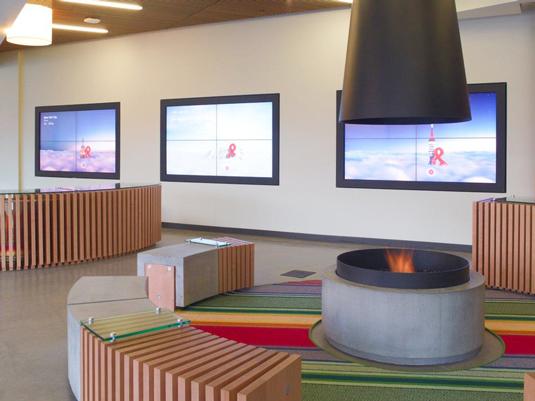 Does your office have a chilled area like this? Ours neither! 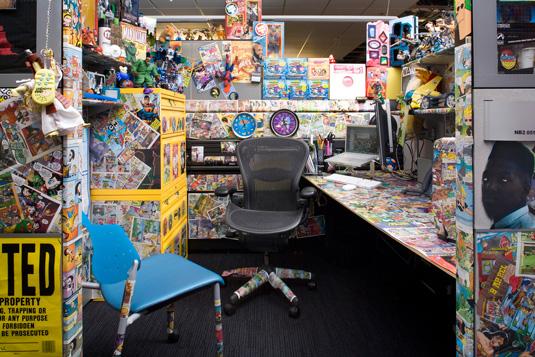 We wonder how long it took to deck this awesome cubicle out with all those stickers...

The Cartoon Network offices in Atlanta still adopt a cubicle system, which, in many circumstances, may not be the most exciting working environment. But this one is anything but dull. While employees may not be able to see each other, instead each individual's workspace is personally customised.

Although many follow the theme of children's TV, cubicles can be found full of all sorts, from bright, colourful furniture and cartoon characters to mascots, photos, stickers and magnets. 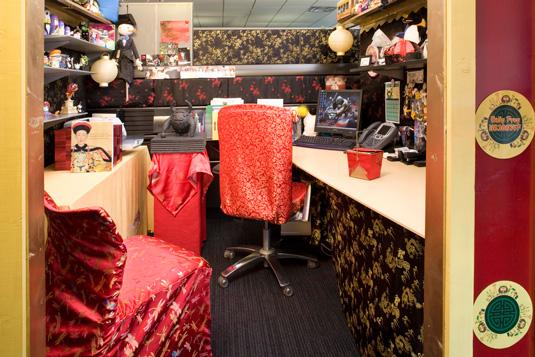 Cartoon Network employees get their own custom-designed cubicle workspace 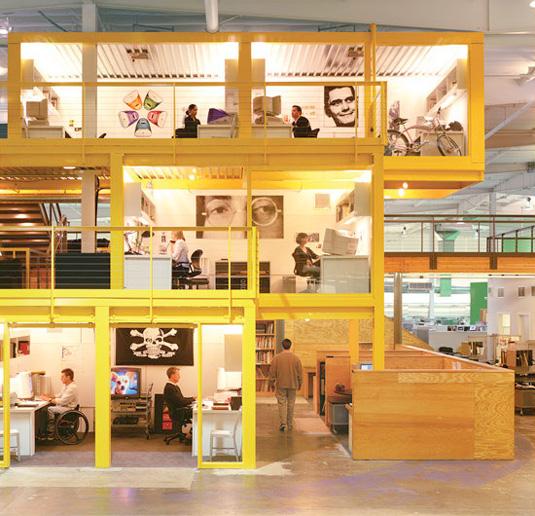 The TBWA New York offices has no allocated seating, meaning employees can sit wherever they choose each day

Italian artist, designer and architect Gaetano Pesce was the brains behind this very cool New York office space for ad agency TBWA. The outdoor-inspired design features a huge wide-open floorplan, full basketball court, big-screen TV, a classic London telephone box and even has trees growing inside of the building to give it a fresh feel.

With no allocated desk spaces, the TBWA team are also encouraged to change seats each day to encourage impromptu encounters and collaborations. 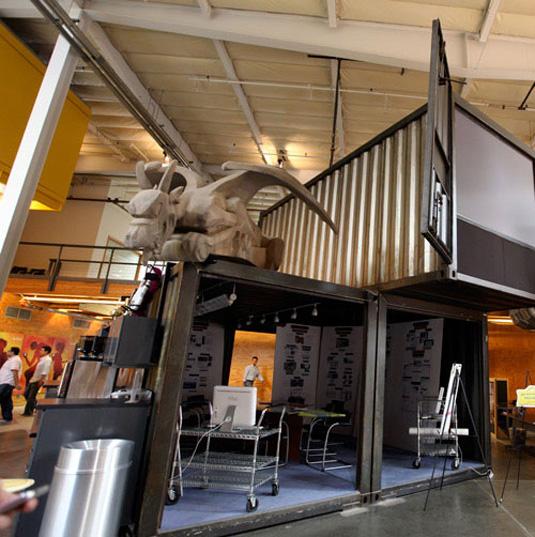 The big, open space is filled with awesome design features, including sculptures and a red telephone box 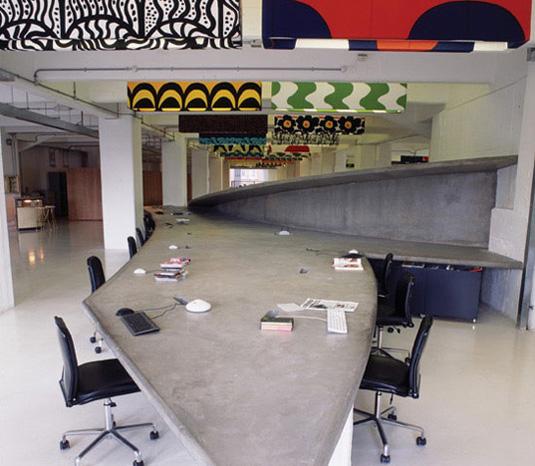 This impressive table accommodates roughly 200 employees, who are required to change seats every six weeks

We have to admit, the studio of London-based ad agency Mother London leaves us with a serious amount of office space envy. Designed by Clive Wilkinson Architects, it'd take us a while to list all the cool features held within these four walls.

But our favourites include meeting rooms filled with quirky, one-off pieces of vintage furniture and, probably most impressive of all, the cool 250ft communal concrete table, which accommodates roughly 200 employees. 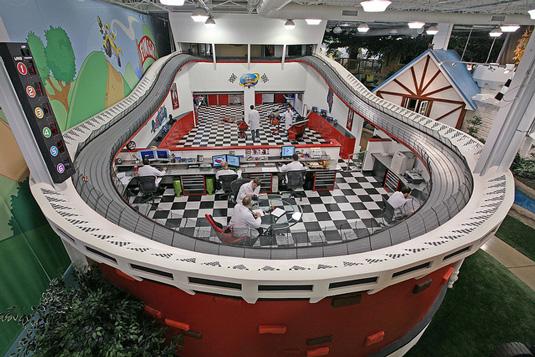 Inventionland developed 15 different sets for its employees to work in, including this cool race track

Inventionland is the design facility of Pittsburgh-based invention promotion firm Davison Design & Development. But more importantly, it has offices unlike any we've ever seen. The 70,000sqft facility was designed with 15 different sets, created by the company itself and built almost entirely in-house.

Lucky employees get to work in the awesome surroundings of pirate ships, castles, robots and faux caves among other things. And that's not all, the facility also has a state-of-the-art sound, video and animation studio and fully-equipped workshops for creating working prototypes of inventions. Jealous? We are! 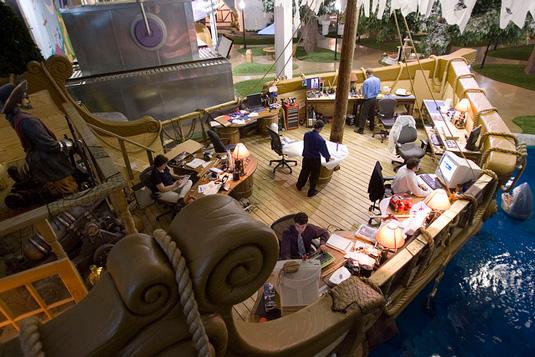 Ship Ahoy! Inventionland staff are busy at work on this awesome pirate ship 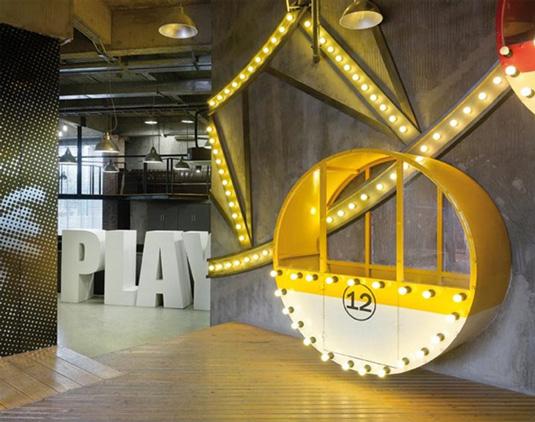 We're loving this carnival-inspired office belonging to international advertising, marketing and public relations agency Ogilvy in China. Designed by M Moser and Associates, the office was the first interior design project to receive China’s Most Successful Design Award in 2008.

The design, titled 'A Carnival of Ideas', incorporates merry-go-round horses, life-sized nutcrackers and lots of other cool amusement park-themed features. 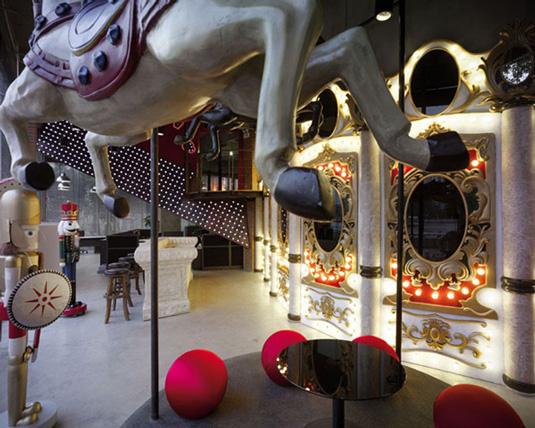 The Carnival of Ideas theme runs throughout the building, featuring merry-go-round horses and other amusement park themed attractions 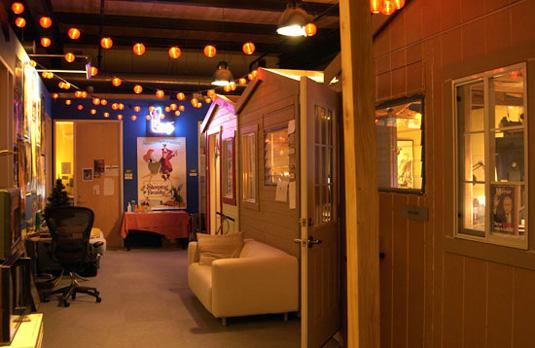 An obvious one, we know. But we couldn't do a list of awesome design offices without including animation giant Pixar. It's hard to understand how the staff get any work done here with so many things to play with, but also no wonder they come up with such great ideas in these surroundings.

Similar to the guys at the Cartoon Network offices, Pixar adopts a cubicle system, and each is customised to its employee's tastes. But that's not all: Every hallway and communal area is littered with life-size movie characters, space hoppers, scooters... the list goes on. The building even has it's own cereal room! Coco Pops anyone? 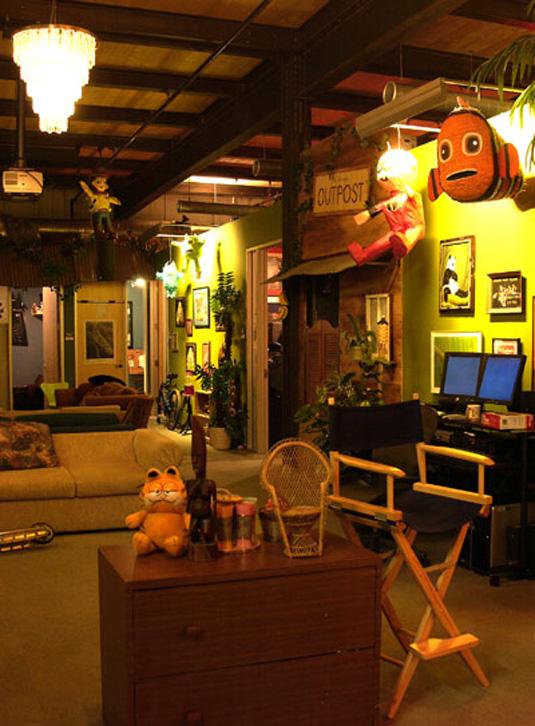 The busy offices are full of inspiring decor. Are those the wheels of a scooter we can see?