The hero image for Gaea, QuadSpinner’s next-gen terrain design tool, which was released publicly this week. You can find a step-by-step breakdown showing how the terrain was created on the company’s blog.

The software is intended to provide an artist-centric approach to terrain generation for games, combining powerful procedural controls with a range of direct input methods.

From World Machine plugins to standalone tools
Previously best known for its popular GeoGlyph add-on for World Machine, QuadSpinner has been developing its own standalone terrain-generation tool for some time now.

Originally known as The TOR Platform, the software entered beta in 2017, before re-emerging in its final form as Gaea the following year. 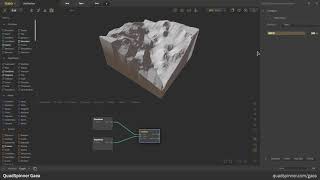 As well as by creating and editing a conventional scene graph, users can control terrain forms through a Photoshop-style layer system or by direct sculpting.

The three methods blur into one another: once created, layer masks are converted to nodes within the graph; and the effect of individual nodes may be modulated via an adjustment-layer-like Post Process Stack.

For direct sculpting, Gaea provides a set of primitives specifically tailored to terrain creation, including mountains, dunes, lakes, craters, faults and tectonic plates, and a range of 3D noise types.

Further procedural systems control snow and sediment deposition, and procedural data can be extracted as 2D texture maps for use to create PBR materials.

Terrains can also be textured manually by gradient editing; or automatically, via the SatMap and Synth nodes, which generated terrain colours from satellite images or reference photos.

Once generated, terrains can be exported as meshes, point clouds or 16-bit height maps, with the option to generate LODs or variants: Gaea comes with a built-in terrain mutation system.

The software comes with a scripting interface for automating common tasks: it’s proprietary, rather than based on a language like Python, but Quadspinner says that it aims to open the API in future.

Pricing and system requirements
Gaea is available for Windows 7+ only. The free Community Edition, which is licensed for commercial use, provides access to most of the key tools, but caps export resolution at 1K.

The Indie edition, which caps export resolution at 4K, costs $99; the Professional and Enterprise editions, which provide unlimited resolution plus a range of advanced features, cost $199 and $299 respectively.