Get top advice from the design duo behind the Harry Potter universe.

In recent years, the role of graphic design in film has become more established, with more and more directors recognising the importance visual artists play in bringing their visions to life. That said, graphic design in film still remains, for some reason, an underrated and unpopular career path. But why is that? Is it too competitive? Too reliant on connections? Impossible to find a way in?

Two people with a lot of answers are Miraphora Mina and Eduardo Lima, aka MinaLima, the graphic design duo tasked with bringing the wizarding world of Harry Potter to life. Having worked on all seven films between them, plus the subsequent Fantastic Beasts movies, Mina and Lima have made history with their designs, with the Daily Prophet and Marauder's Map being just two of many hero props crafted by their very talented hands.

8 things you didn't know about design for film

It's no exaggeration to say these guys are legends within the graphic design film world, but they haven't let it go their heads. Instead, they remain extremely grounded, and have an undeniable warmth and passion, not only for the art of design itself, but for helping others become part of this highly creative world.

Here, Mina and Lima share some truly unmissable advice on what it’s like to work in the film industry, how best to get your foot in the door, why (carefully managed) work experience is still very worth it, and what they look for in applicants when they’re recruiting (psst, which they will be very soon for the third Fantastic Beasts movie).

38 stunning poster designs to inspire you

What's the best way for aspiring designers to get a foot in the film industry door?

"My first job in the UK was work experience on the second Harry Potter film," says Lima. "Then one week quickly became two, then three, then four, ending in me working for three months on the second film, then full-time from the third Harry Potter movie."

"I've always been very skeptical about work experience because it's not fair to get someone to work for free," says Mina. "But Eduardo is proof of it working out,"

"Assuming you don't know anyone in the industry, but you have the skillset," Mina says, "though I was cynical about it before, I actually think work experience is really important for both sides. People might think they want to work in film, but work experience exposes you to the environment and you might change your mind. Or you might love it. And because you love it, you go the extra mile to demonstrate how talented and capable you are."

But how do you go about letting people know you're wanting work experience? A new website, the Graphics Union, is a dedicated space for graphic designers working in film and TV.

"To be a member, you have to have two film credits, which makes it a little difficult for newbies to get access," Mina says. "However, if you've just graduated and you're interested, you can request to add a post, which will go all the members.

"A lot of film studios are difficult to reach places, but if you can get a couple of work experience placements under your belt, demonstrate that you're willing and able – make yourself indispensable. It might be that you have to spend a week sticking labels on boxes in a small part of the studio, but if you've got your eyes and ears open, you will learn so much. And, like Eduardo, you might just be in the right place at the right time."

What training is currently available?

"At the moment there doesn't seem to be any dedicated or specific modules in design courses that focus on graphic design in film," says Mina. "I'm sure someone's going to wake up to it soon and be smart and maybe build a module into the graphic design courses that bring people into the industry. But until that happens, Annie Atkins, known best for her work on Wes Anderson's The Grand Budapest hotel, runs weekend workshops in Dublin.

"And we are actually planning to do some of our own workshops in the next six months as a result of constantly meeting people who don't know how to take their graduate skills to the next step. The idea is to run some weekend workshops in the coming months, based in London, for small groups looking to develop their graphic design in film skills. 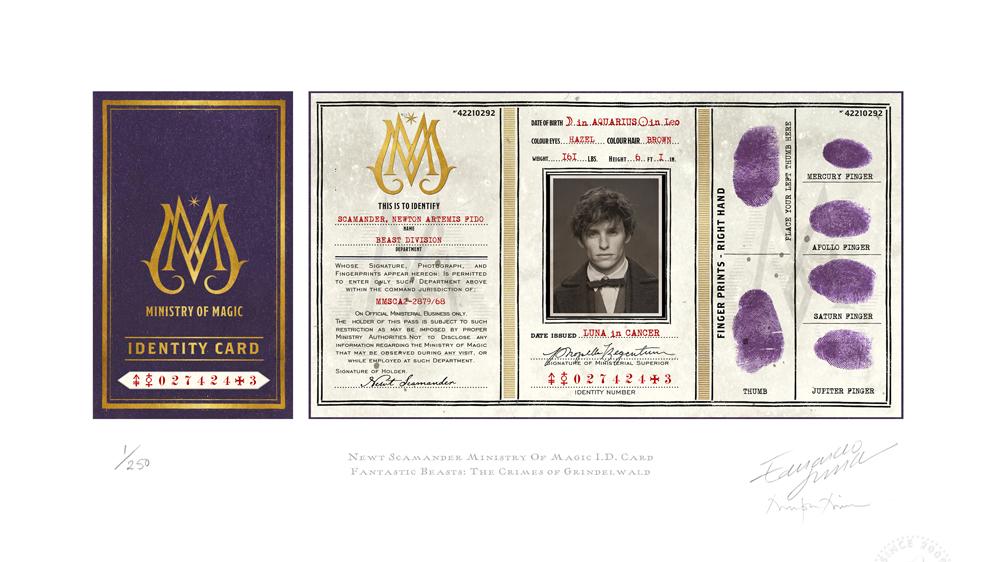 What qualities are you looking for in applicants when hiring?

Speaking of opportunities, during our time spent with MinaLima, we got wind that the studio will soon start work on the third Fantastic Beasts movie, for which they will be recruiting in the not-so-distant future.

So what do they look for when recruiting, and where can applicants find details of how to apply?

"A sensibility for detail is key," Mina says. "Some people set their own projects and put them in their portfolio. For example, I've seen applicants recreate their family history using false letters between family members, where they've gone and researched all the right ink and stamps etc. It's about having a curiosity for the ephemera.

A sensibility for detail is key

"Eduardo and I totally geek out on those things because they give you information. We have boxes of stuff in our studio, which aren't just on typography from a certain period but how that typography was painted on a wall. What sort of printing techniques were used and how do they show on a page, do they leave an impression? Being interested in the history behind something and researching it is key, as it's all of those details that will help an audience believe that something is authentic. That is a trait that's really hard to force that onto a designer. You're either into that or your not, and when people are, it's like they speak the same language.

"Of course there's some practical elements, I don't need to say about learning industry standard software as most people will know that already. But extending your skillset to know how to work with an ink or nibs pen, or working with a different medium, like charcoal, for example.

Lastly, Mira stresses the importance of being able to keep a cool head. "There can be a lot of putting out (metaphorical) fires in this industry, and panicking is just completely unhelpful," she says. "People who are calm under pressure, willing and flexible are all good traits to have in this industry."

What's been the biggest lesson of your career?

"I think one thing you definitely learn as you get older and more experienced is to be patient," Lima says. "I don't mean just sit around and wait for things to happen, you know, keep going, but at the same time be patient. Becoming a senior designer from a junior designer doesn't happen overnight."

"It's not surprising that people are in a hurry when you can order a pizza or a cab, for example, with a simple swipe these days," says Mina. "But you can't necessarily apply that to the workplace. Patience gives you a chance to try spot the things you like and are good at. It's so easy to get stuck doing the wrong thing, to the point where you're scared to stop, especially when you start having more responsibilities in your life.

Mina is also keen to champion keeping an open mind when it comes to choosing a career path. "It was only through doing an art foundation course that I learnt about theatre design, which is why I think foundation courses are really important for art students. It helps you explore things you might not have known about yourself and all of these new discoveries might lead to a path you'd never imagined."

Next page: the truth about the film industry