Meet the artists utilising their concept art skills to design and build theme park attractions around the world.

Theme park design: it's rarely the first thing that pops into your mind when thinking about the creative industries. You’ve probably been to a theme park, but you may have missed that the concept art behind these fantasy spaces is as inspiring as any imagery that’s created for the latest Hollywood blockbuster.

What’s more, it’s a massive industry. There are more than 400 amusement parks in the US, and 300 in Europe. Disney alone made 16.16 billion dollars from its theme parks back in 2015! Themed entertainment – and the art that underpins it all – is in excellent health.

Read on to find out how your artistic talents can transfer to theme park design, discover which new skills to hone and learn how to break into the industry.

How to master colour theory

West continues: “Things like value structure and knowledge of colour theory is important. You also need to know how to work well with people and under deadline pressure, as well as understand the basics of environment lighting and design.”

But what of the differences? Theme park art, says West, is more “optimistic and bright. Films and games are usually moodier and darker, whereas theme parks emphasise colour and charm much more.”

Furthermore, you get to walk around in your own creation! The initial stages of concept art may focus on similar stages of film concept, like mood and colour. But then come the architects...

Concept and animation background artist Qianjiao Maspells it out for us: “Your concepts have to be buildable, and to consider things like ceiling height and furniture size. Unlike concept art for film, which is primarily concerned with cool visuals, theme park design requires the equivalent attention to design for the entire space, not just a single shot. As a theme park designer, I’m also weighing up the visitor experience. How would the guests interact with the attractions?” 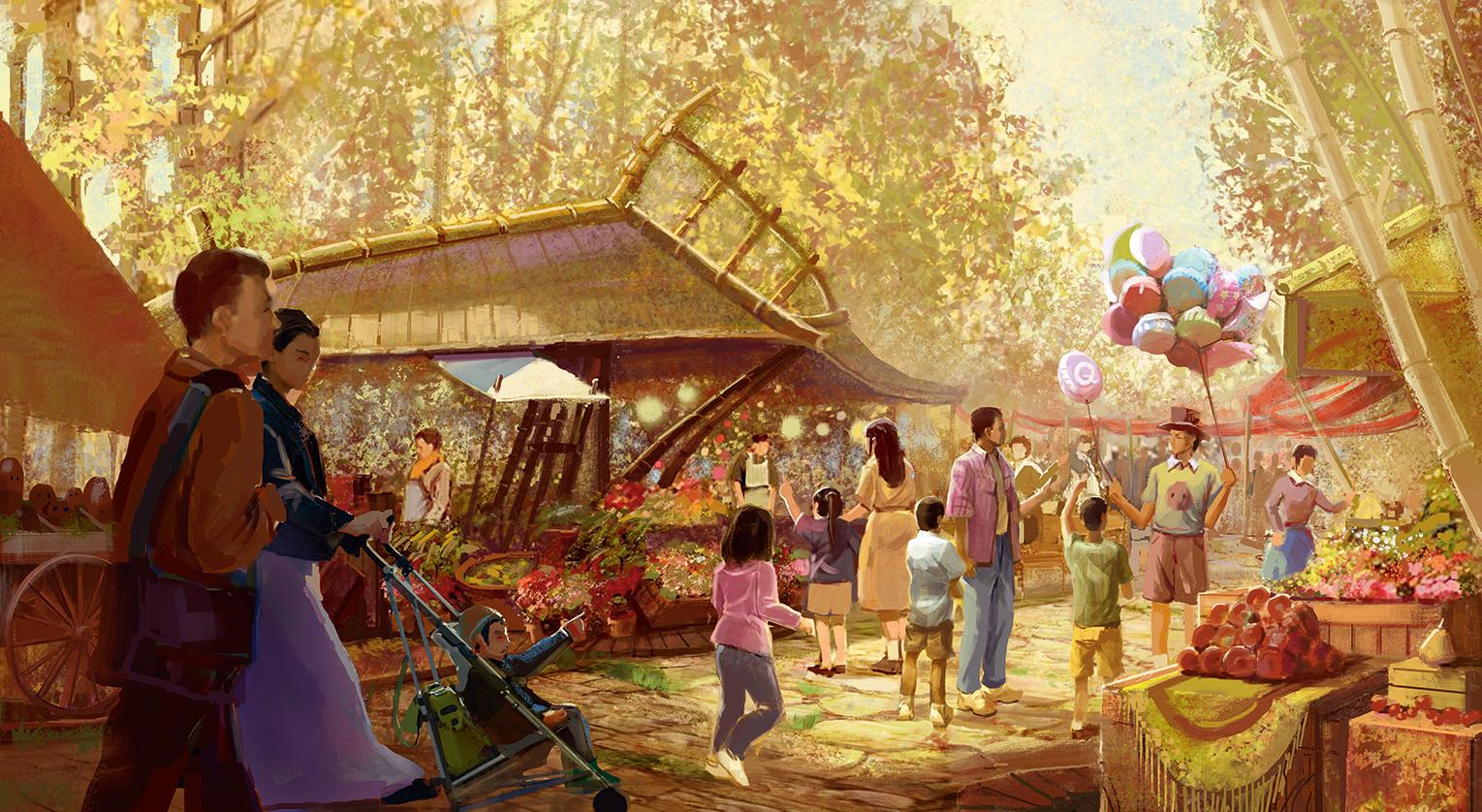 For digital art legend Stephan Martinière, the first and foremost skill you’ll have coming into themed entertainment, “is your imagination.” That will be quite a relief to those expecting you’d need a degree in architecture. In fact, each themed project seems to differ as much as games, films or TV shows, fully depending on the client. Some want hyper-real visuals from the get-go. Others ask artists to work towards reality only once the loose brush marks have captured the feel of the park space.

“Of course, having architecture design skills can certainly help in understanding circulation or cost, but it’s not a requirement,” says Martinière, who first got into theme park art back in 1980s with the Japanese indoor park Sanrio Puroland. “Theme park companies have technical directors and architects who handle the more technical aspects,” he says. Photoshop is Martinière’s primary tool, and though his concepts are usually detailed, they always come with a painterly feel.

A decade in the making

Yes, the chance to walk in a world you’ve created is a huge appeal, but don’t expect the relatively short lengths of film projects. “The timeline for theme park design is quite extensive,” says Martinière. “One of my credits, the Warner Bros. World in Abu Dhabi, took 10 years to make, from the initial concept art, to completion.”

Whether the next biggest Disney instalment or a smaller scale affair, most theme park projects take years to design and produce, but, “when you finally experience the Adventure Isle, The Pirates of the Caribbean or the Avatar’s Na’vi River Journey,” Martinière continues, “it does bring a big grin to your face. Theme parks also reconnect me to my childhood.”

For the Adventure Isle for Shanghai Disneyland, Stephan Martinière was involved very early on in the process, including the narrative development of the land and, of course, the visual concepts.

As with any job in any industry, it’s a good idea to ask yourself, “What extras can I bring to the table?” In an ever-demanding industry, for 2D artists that usually means offering 3D skills.

“Clients often provide you with rough 3D models, generally created in SketchUp,” Martinière says, “so again it’s not essential, but it’s worth it. I was working on a futuristic project recently and was given the blueprints of the different spaces. Being able to build and design the space in 3D from measurements enabled me to be more accurate in creating the different architectural elements for the space, and also to make the concepts work visually from different points of view.”

For the Pirates of the Caribbean boat ride Martinière received the 3D block-out model of each of the rooms of the ride along with blueprints, and references from the film. The first step was to have a meeting with the art and creative directors to discuss the visual and narrative direction of the ride,” says Martinière. “During the meeting we also discussed the various technical requirements such as safety, boat clearance, light and FX uses. My task was to create detailed and elaborate paintings to define the mood, details and lighting of each scene.”

The process took months of refinement for Martinière, because his paintings were going to be the main visual guide for the rest of the process. “I also produced the ride entrance poster once the ride was completed. The 3D block-out that was provided was sufficient for me to move on to the painting stage without further need to build extra 3D but for other, more recent projects that required a more tech look, I almost entirely built the scenes in 3D.”

It’s great to discover a whole new world of art possibilities, but what if you don’t know anyone working in themed entertainment? The truth is, breaking into the theme park industry is pretty much the same as any other. There are various approaches that you can take, from arranging to meet an industry figure at a convention, to sending your portfolio to the theme part art department.

For veteran artist Greg Pro, the key was being hungry for work. In art school he was being taught by the brilliant Fred Fixler, and when Landmark Entertainment contacted Fred for a job producing 12 oil paintings depicting a Japanese fairy tale, to be installed on a carousel in a theme park in Japan, Fred recommended Greg.

“I had no idea that there was a market for theme park art until I saw the work of Eric Heschong,” says Pro. “His work inspired me so much that I wanted to be a part of that field. Soon after the carousel art was finished, they assigned me some concept art to do for a dark ride. I can’t recall the project, but I remember using gouache to paint the artwork. That’s when Eric suggested I try Cel-Vinyl paint.”

Pro stayed on with Landmark for years, creating hundreds of concepts for theme parks all over the world. “I was fortunate enough to work on many high-profile concepts such as Jurassic Park: The Ride, T2-3D: Battle Across Time, Skeleton Warriors, and even Michael Jackson’s Neverland Ranch,” he says. 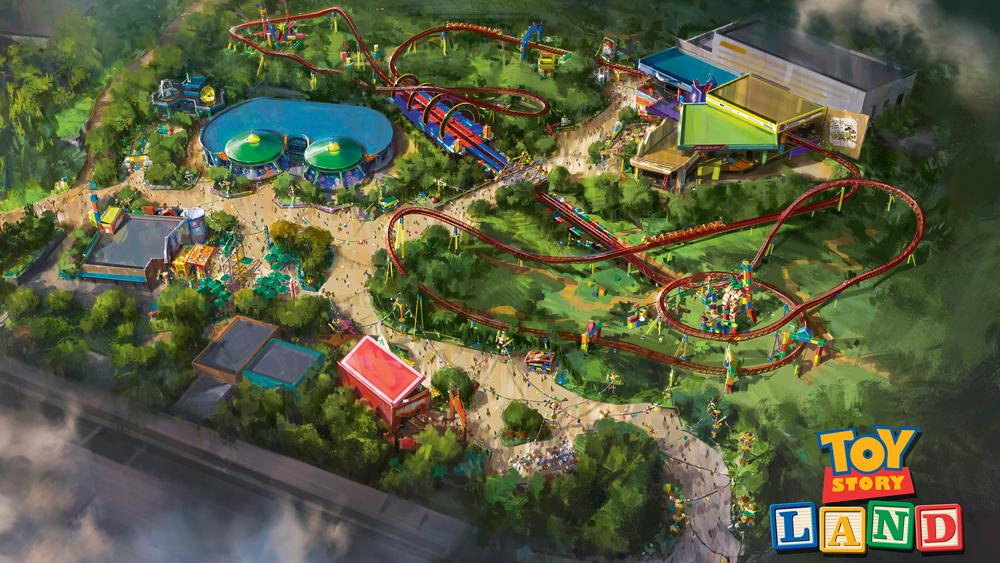 Greg Pro's work on Toy Story Land at Disney’s Hollywood Studios in Florida. The park opened June 2018, and is the fourth of its name around the world

Martinière sees getting into theme park art as the same as film, game, comics or animation. Do your research, find out the main companies – Disney is by far the biggest player in the business, having kicked things off with the very first modern theme park, Disneyland, in 1955. Search out contact details, and send in your art that shows the skills needed to build worlds.

“I didn’t know what to expect at first, but quickly realised I loved the challenge of learning and working within specific spaces, and finding ideas and solutions to particular technical requirements,” says Martinière.

For West, “It’s like any field. If you do good work and you’re professional, you will stand out within your industry. You might not be known around the world, but you can stand out among your peers."

This article originally appeared in issue 168 of ImagineFX, the world's leading magazine for digital artists. Buy issue 168or subscribe here.

Graphic design in film: the ultimate guideHow to create a creative portfolioHow to get a design job: 7 expert tips