Discover the new creative tools you need in 2019.

Earlier this month, creatives from all over Europe gathered for Adobe's Creative Meetup in London to talk new Creative Cloud innovations and be inspired by some of the UK's most creative minds.

Creative Cloud Evangelist Rufus Deuchler kicked the evening off, regaling some of the magic of Adobe MAX, the world's largest creativity conference held earlier this year in LA. In an awe-inspiring talk, Deuchler teased the audience with news of major updates to Adobe's flagship titles, including Photoshop, InDesign and Premiere Pro.

If the mind-blowing demonstrations of these apps are anything to go by, these are four creative tools you're going to need in your arsenal next year. Let's take a closer look...

In recent years, video has rapidly grown to dwarf other content that's being shared and consumed online. But creating quality video content doesn't come easy, or cheaply, and has remained out of reach for many. Until now.

Adobe's all-new video editing application Premiere Rush CC enables anyone and everyone to easily create and publish professional-looking videos. Harnessing some of the power and basic functionality of its older sibling Premiere Pro – such as the timeline, colour and audio tools – Rush simplifies the video production process for non-professionals. Once edits are finished, Rush will automatically export in the appropriate formats for the selected social platform. "You don’t have to be a video, colour or editing expert to create quality videos," said Deuchler.

Premiere Rush also features Adobe Sensei (artificial intelligence) technology in the form of auto-ducking, which automatically lowers the volume of an audio track when someone is speaking.

If video is something you want to be doing more of in 2019, Premiere Rush CC is a must-have tool. And the best news? Premiere Rush CC is available direct from Adobe as a standalone app for £9.98/$9.98 a month. Rush will also be part of the All Apps subscription and Adobe is also including the program with the Premiere Pro CC single app subscription. The price includes 100GB of cloud storage, which will help manage all those video projects.

If you're into traditional art, or on the hunt for an art app that 'does it all', you're in luck: Adobe has been working on something just for you. 2019 will see the arrival of Project Gemini, Adobe's next generation painting and drawing app, which combines Photoshop's powerful brush engine with an entirely new category of groundbreaking live oil and watercolour brushes.

The Project Gemini team, lead by renowned artist Kyle T. Webster have put Gemini through rigorous testing with professional artists to ensure that the drawing and painting tools are as true to life as possible. And the results are absolutely mind boggling.

Don't believe us? See for yourself in this demo from renowned artist and Project Gemini lead Kyle T.Webster.

Speaking of mind-boggling innovation, it doesn't come much better than Project Aero, Adobe's powerful new augmented reality (AR) authoring tool. We've witnessed Aero in action, and it's fair to say this app is truly pushing the limits of creativity and storytelling in a way never seen before.

"AR is the next breakthrough medium for creative storytelling," said Adobe senior product manager Zorana Gee, as she demonstrated Project Aero on stage at MAX. As Gee transformed a 2D illustration into an immersive 3D experience that she was then able to dive into (yes, you read that right), it was hard not to get excited by seemingly endless possibilities Aero offers.

With Project Aero set to be released in 2019, next year could well be a creative game-changer. See Project Aero in action below and sign up for early access to the app here. 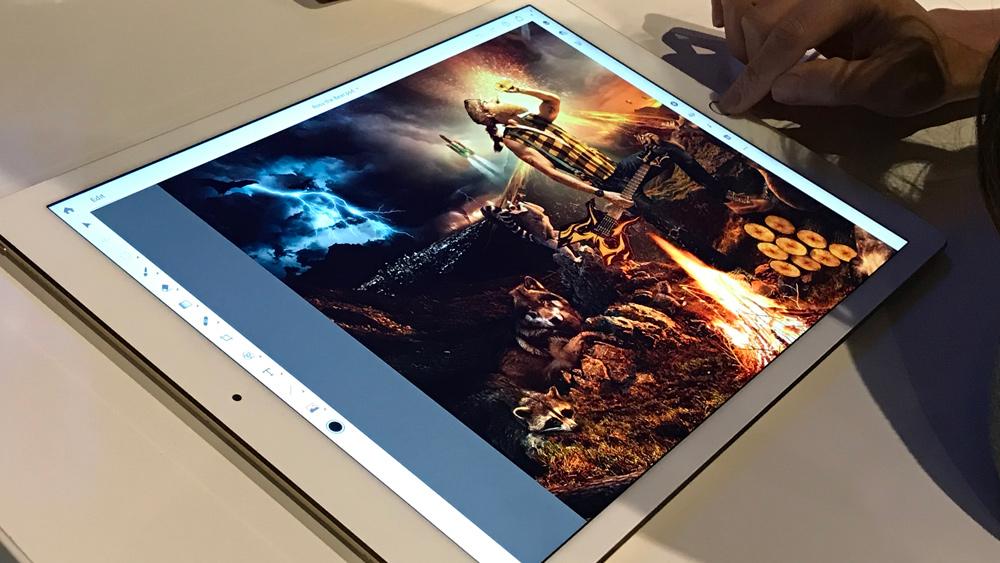 Ah, the one so many have been waiting for! 2019 is the year Photoshop will become available on the iPad. And we're not talking a watered down version either, but full Photoshop for iPad, meaning you can open and edit (huge) PSD files on an iPad, using the same tools they are used to on desktop.

Photoshop for iPad uses the same base code as the desktop version, which will include all the core tools and offer the option to add filters, work with layers and make selections and adjustments, and much more. It's worth noting this new Photoshop won't be exactly the same as the desktop version, however, as it will have a "reimagined user experience" that is optimised for touch devices, making the most of the iPad's Pencil, touch gestures and mobility.

Not only will creatives be able to work on PSD files on the iPad, but files will also sync across devices, via the new Cloud documents. This will mean you can begin working on your desktop, make some changes on your iPad, and then go back to desktop, without having to faff around with importing or exporting files.

Photoshop for iPad will be available on its own, or as a partner to Photoshop on the desktop in 2019.