The best memory cards for your camera

Memory cards come in varying capacities, formats and speeds, so which is the best for your camera?

Need the best memory card for your new camera? Look no further. We've compiled the best storage media available right now – fast, high-capacity and durable, everything from SDHC to CompactFlash. No matter whether you're an amateur taking casual snaps or a professional capturing images for high-end clients, you need memory cards that won't let you down – and ideally ones that won't break the bank. That's where we come in. Read on for our top recommendations.

Which is the best SD card?

Most photographers will be aware that the postage stamp sized SD (secure digital) card, also available in SDHC and SDXC iterations, is the memory card most commonly supported by today’s digital cameras. Within that context, we think that the SanDisk Extreme PRO SD UHS-I is one of the best SD format memory cards currently available.

But there’s also the fingernail-sized microSD utilised by smartphones and tablets, the older but still popular CompactFlash (‘CF’), utilised by many DSLRs, plus what has been termed CF’s successor in the newer XQD format memory card.

Eyebrows were raised when the Nikon Z6 and Z7 mirror-less cameras were recently introduced with a single XQD card slot. While they may be currently less common (and pricier), the good news is that the XQD memory card has been specifically designed to keep up with the shooting speeds that these latest generation cameras offer; a blazing fast read and write time a particular advantage when capturing Raw files or 4K video.

So when choosing your own best-fit memory card it’s very much a case of horses for courses. You’ll need to consider what you’ll be shooting on, how fast you’ll be shooting, whether you mostly shoot Raw or JPEG, Full HD or 4K video – as well as what your budget is – and choose a memory card with a capacity and performance to match accordingly.

Card type: SDXC | Capacity: Up to 512GB | Read Speed: Up to 90MB/s | Write Speed: Up to 95MB/s | Warranty: Lifetime limited warranty | Suitable for: Both photography and/or video (including 4K)

Power users are advised to check out the Extreme PRO SDXC card from long standing card manufacturer SanDisk. Available in capacities from 32GB up to an impressive 512GB, this option offers a speed class 3 rating. The real practical advantage here is not only write speeds up to an impressive 90MB/s – which means that it is able to deal with rapid fire sequential shooting and in both JPEG and Raw – but also has a extremely fast transfer speed of up to 95MB/s, which will speed up the workflow of enthusiasts and pros. Aside from making it easier to capture a sequence of Raw photographs, the data crunching on offer here also makes it suitable for 4K video shooting. To sum up, this is one capable contender. 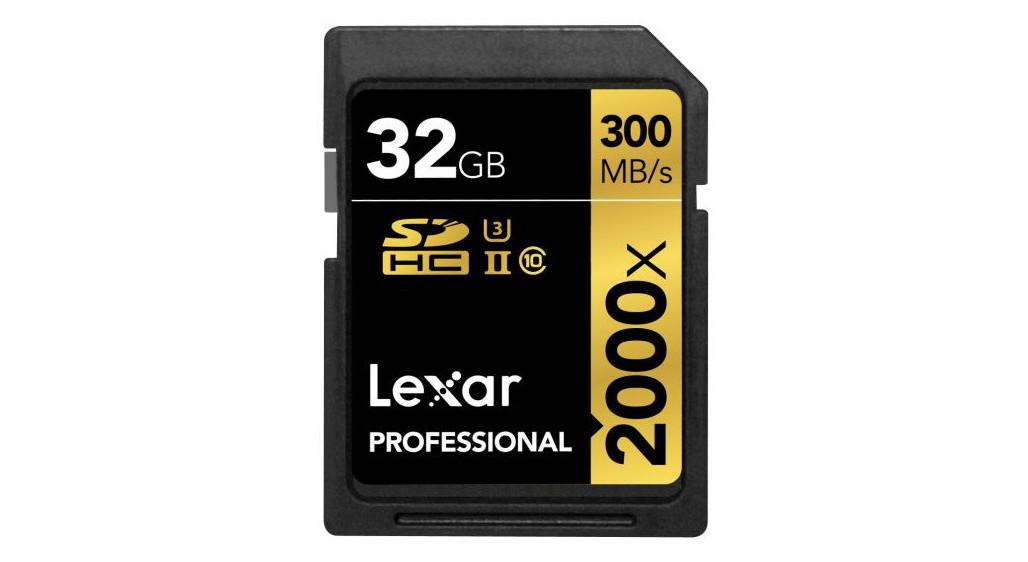 The best SD card for pros

Card type: SDHC and/or SDXC | Capacity: Up to 128GB | Read Speed: Up to 300MB/s | Write Speed: Up to 260MB/s | Warranty: Lifetime limited warranty | Suitable for: Both photography and video (including 4K)

Lexar has long been the go-to card for photography enthusiasts and professional shooters, and, despite disappearing from the market for a little while, it has bounced back with plenty of Lexar options still available. A solid choice for us is the Lexar Professional 16GB Class 10 UHS-II 1000x Speed, which deploys UHS-II tech to enable transfer speeds up to 300 MB/s and write speeds up to 260 MB/s.

This ensures that, whether you’re recording full HD, 4K video, or shooting high-resolution Raw files, this card delivers the goods, even if maximum data capacity is 128GB, rather than the maximum 512GB offered by some rivals. A close alternative in terms of specification and performance would be SanDisk’s Extreme PRO SD UHS-II (also featured here), but we feel you can't really go wrong with this one. 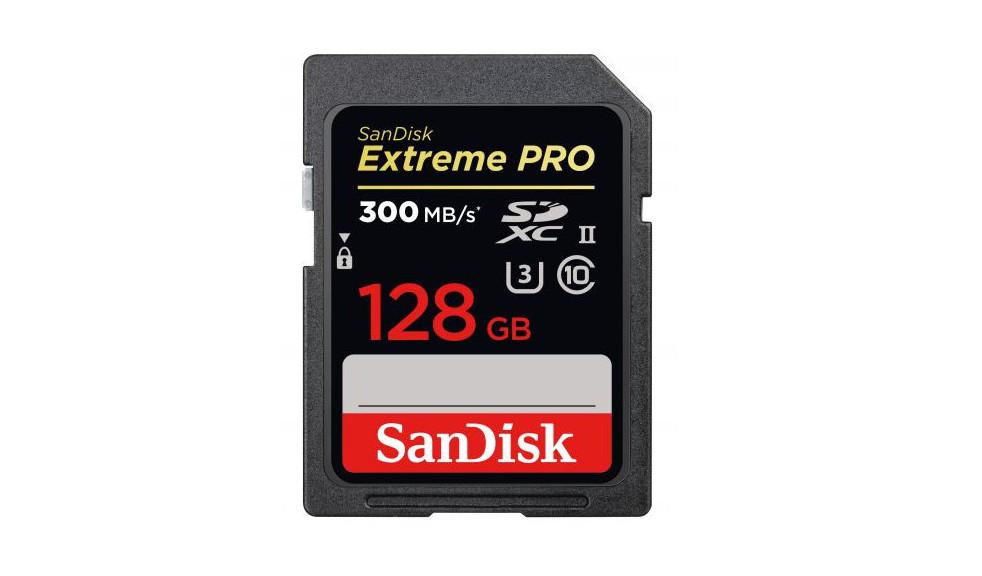 An even faster card than the UHS-I Pro version

Missing that essential shot if you’re working as a pro photographer can be an expensive mistake, and is especially irritating if it’s because your card can’t keep up. Try and avoid the latter ever happening by investing in this ultra speedy, inevitably costlier, example from industry stalwart SanDisk – the SanDisk Extreme PRO SD UHS-II. In offering read speeds of up to 300 MB/s and write speeds of an equally impressive 260 MB/s, it's a class leader among memory cards.

The above specification makes it a must-have option for reportage, sports and wildlife photographers, shooting bursts of rapid fire stills, or videographers wanting the clarity of 4K resolution video, with the inevitable data hungriness that comes with it. As this is an SDXC (‘Extended Capacity’) card too, storage is impressive. Available card offerings are from 32GB up to 128GB, but truly the accent is on speed here. 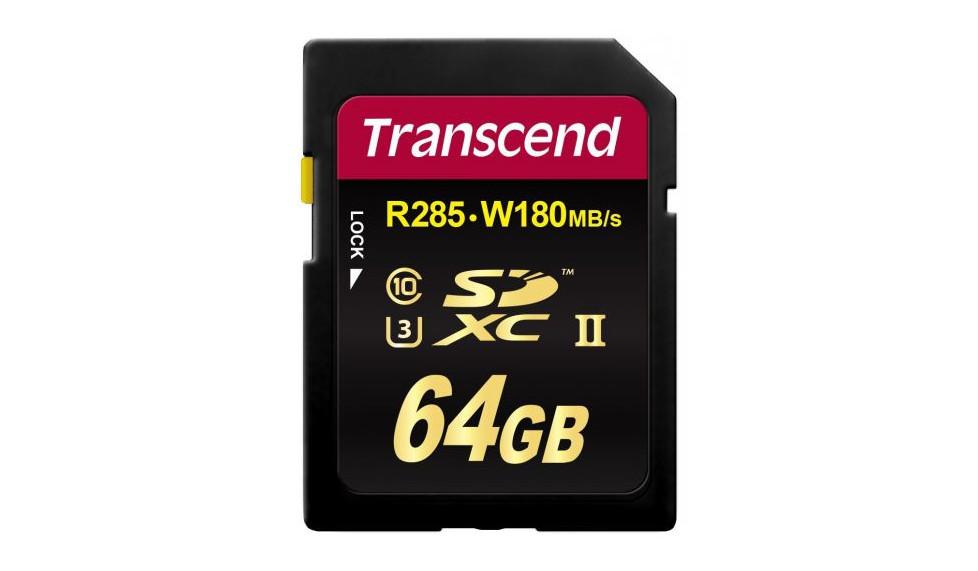 If it’s Raw files you primarily need to capture, then you’ll want a card that can cope with the highest quality imagery in sequential bursts – as well as one that provides a sufficient storage capacity to avoid having to swap out the media in use at that decisive moment. While the Transcend SDXC UHS-I U3's 64GB maximum capacity (the alternative being 32GB) may initially appear a little small when compared with other options here, the performance is anything but, via commendably quick read and write times of 285 MB/s and 180 MB/s respectively.

Obviously you will need UHS-II compatible DSLR or camcorder to be able to use this one – so check – but speeds of up to 3x faster than standard UHS-1 SD memory cards can be delivered. These Transcend branded cards are also shock and X-ray proof, thereby providing a degree of certainly for photo and video enthusiasts and pros. 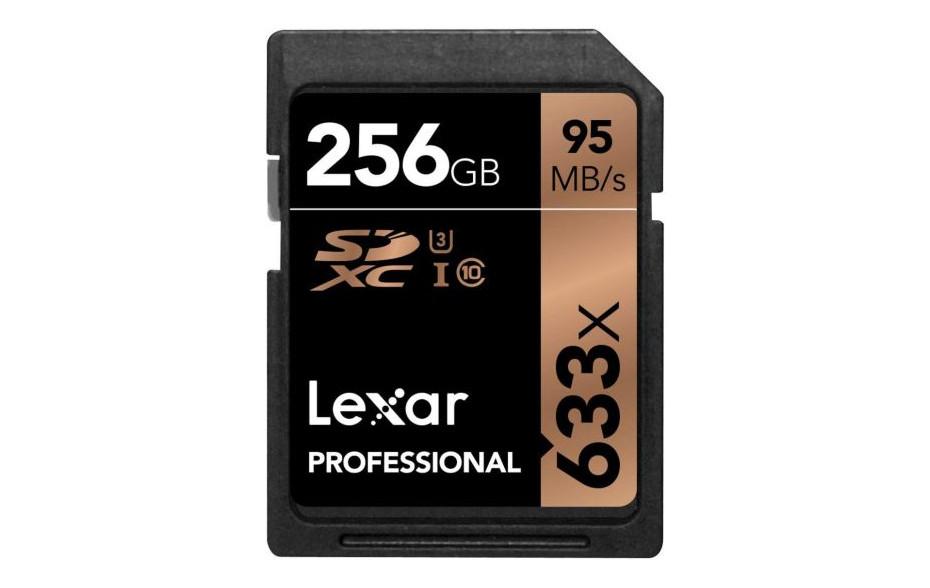 Card type: SDHC and/or SDXC | Capacity: Up to 512GB | Read Speed: Up to 95MB/s | Write Speed: Up to 45MB/s | Warranty: Lifetime limited warranty | Suitable for: Both photography and video (including 4K) at pro level

As photographers, we always think we have enough storage capacity until suddenly we don’t. The Lexar Professional 633x SDXC UHS-I is designed for use by DSLR owners, with up to 512GB of storage capacity offered. The only (inevitable) downside is that the read and transfer rates are a little more modest than the lower capacity yet higher speed cards pitched at professionals. This means you'll need to decide which is more important to you – having the space to store many hours of video, or having the potential to transfer it between devices super-quickly. Ultimately the fact that there is a choice between the two makes us as consumers the victors. 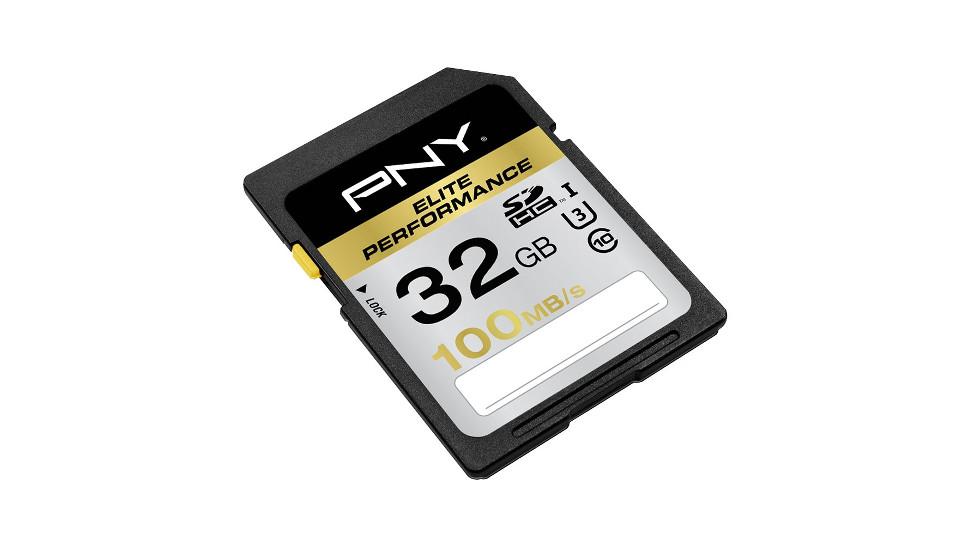 PNY pitches its cards at the pro market, offering models that not only have fast transfer speeds but are also protected against the dangers of an outdoor shoot. This Elite Performance SDHC comes with built-in shock resistance, as well as protection from extreme temperatures and limited water resistance, so if you're an adventurous shooter looking to push your camera to its limits, this is an ideal choice. The best part is that, despite being specced for pros, the card is much more reasonably priced, and even casual/amateur users should find the asking price agreeable. At 100MB/s the transfer speeds are none too shabby, and the card will easily keep up with even demanding tasks such as recording 4K video 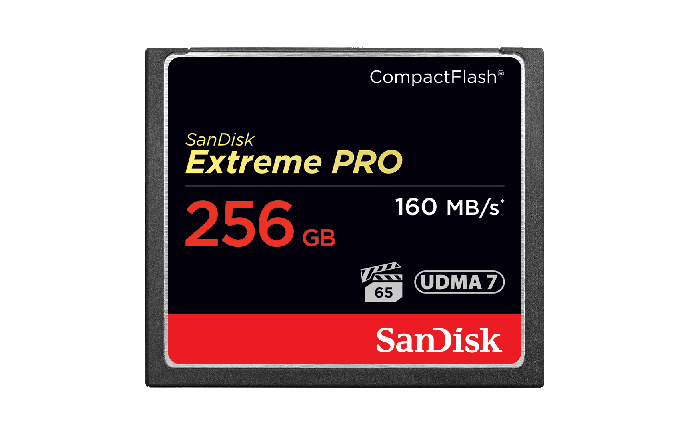 There’s nothing retro about a 160MB/s read speed

Card type: CompactFlash | Capacity: Up to 256GB | Read Speed: Up to 160MB/s | Write Speed: Up to 150MB/s | Warranty: Lifetime limited warranty | Suitable for: Both photography and video (including 4K)

Compact flash cards may be older and bulkier than the newer SD format alternative, but that doesn't mean they can't still deliver sufficient capacity and speed to satisfy today’s DSLR user. A case in point is SanDisk’s CompactFlash range, which offers capacities from a useful 16GB to a power user 256GB, so you don’t have to swap out media cards in the heat of the action.

Also impressive with this one is write speeds of up to 140MB/s at maximum 256GB capacity (otherwise it’s 150 MB/s for the 128GB and lower capacities), which also makes it just as suited to video use, particularly for those DSLRs also offering Full HD capture. In fact, with a minimum sustained write speed of 65MB/s, the claim by its manufacturer is that this one is class leading. 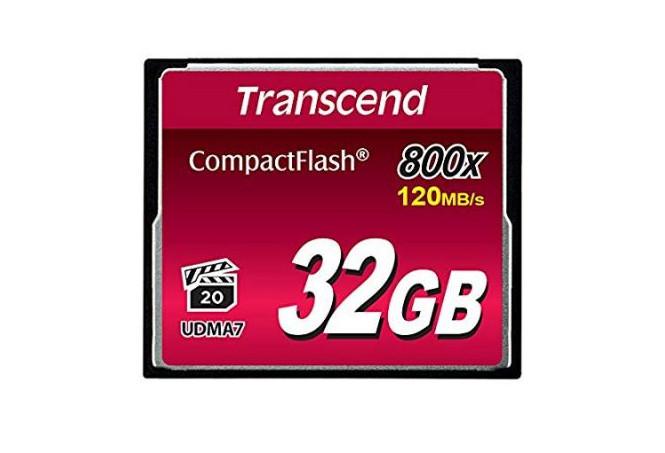 Transcend’s CF gives plenty of data storage for your buck

Card type: CompactFlash | Capacity: Up to 256GB | Read Speed: Up to 120MB/s | Write Speed: Up to 60MB/s | Warranty: Five year limited warranty | Suitable for: Both photography and video (including Full HD)

While it may not be as recognisable to the casual observer as competing card brands, Transcend is one of the longer-term players in the market – and, usefully, still makes many low-capacity cards, holding obvious appeal for those on tighter budget. However, even the higher capacity offerings that may appeal to semi pro DSLR users – such as this CompactFlash 800 series – are hardly expensive for what’s on offer.

Capacities run from a standard 32GB up to a slightly more impressive 256GB. Specification is also solid for a budget card; here we get read speeds of up to 120 MB/s and write speeds of 60 MB/s. Actual performance of course is affected by camera hardware and software, as is the case with any card. However, here there’s even a built-in error correcting code to detect and correct any transfer errors. 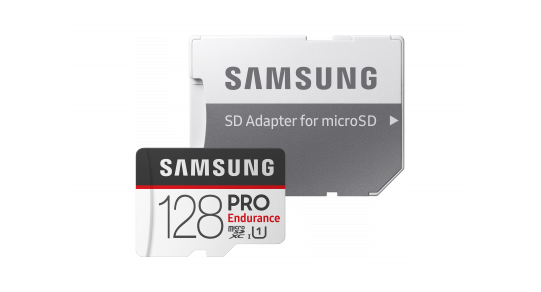 A MicroSD card suitable for an array of devices

Yes, if you want the best then you’ll have to envisage paying more for bog standard microSD cards with larger SD card sized adapters; though at £30.99 for 32GB, or up to £112 for the £128GB variety – less than one pound sterling per gigabyte – this series of cards will hardly break the bank. The draw here includes the fact that the cards are claimed to be able to withstand harsh environments, are longer lasting and are particularly suited to use in action cameras. This is because they can continually record at high read/write speeds (100MB/s and 30MB/s, respectively). Also promised for the highest capacity card is an industry best of 43,800 hours of continuous video recording. Peace of mind comes courtesy of warranties of between two years for the lower capacity cards, to five years for maximum capacity cards. 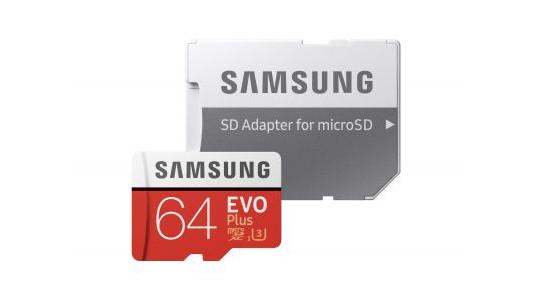 Arriving with us in 32GB, 64GB, 128GB and 256GB capacities, these Class 10 microSD cards handily come with an SD adapter that allows them to be used in cameras just as easily as a smartphone or tablet. Costing less than £20 for the lowest 32GB capacity, this seems like good value considering they manage read speeds of 100 MB/s (albeit a modest write speed of 30MB/s). A bright red design also ensures this jack of all trades option from Samsung won’t readily get lost down the back of the sofa, despite being fingernail sized. Peace of mind also comes via a 10 year limited warranty, plus the fact that the cards are claimed as waterproof, temperature proof, X-ray proof and magnetic proof.